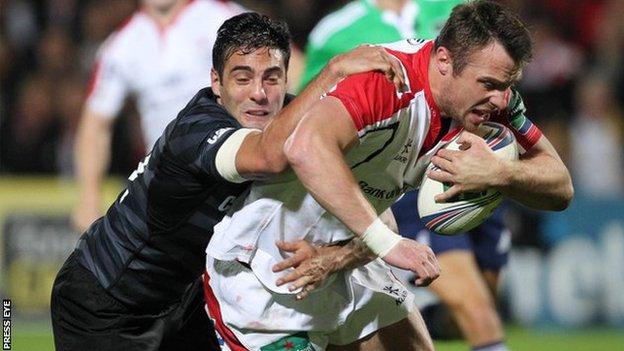 Ulster coach Mark Anscombe says winger Tommy Bowe should be back in action later this month after being sidelined with a groin problem.

Lions star Bowe has been out of action since December but he could make a return in the 14 February Pro12 match at home to the Scarlets.

"He is progressing well now. He was out there today running alongside the team," Anscombe said on Wednesday.

"There was a little setback which put him back a couple of days."

The Ulster coach added: "We are hopeful he is only a week or two away.

"I do not want to speculate on when his comeback will be, or put targets on.

"However, if he continues to progress the way he has over the last couple of days we would be hopeful of Scarlets or, if not that game, Treviso."

Fourth-placed Ulster play the Ospreys in the Pro12 this Friday night, needing a victory to maintain their push for a place in the end-of-season semi-finals.

"These next few games in the Pro12 are crucial," said Anscombe.

"It is important, when you lose your key players for the international duties, you come away with the results you need for the run home.

"We want to be in a healthy position on two fronts. We need to be sure we are in contention for the Pro12 as well as the Heineken Cup."