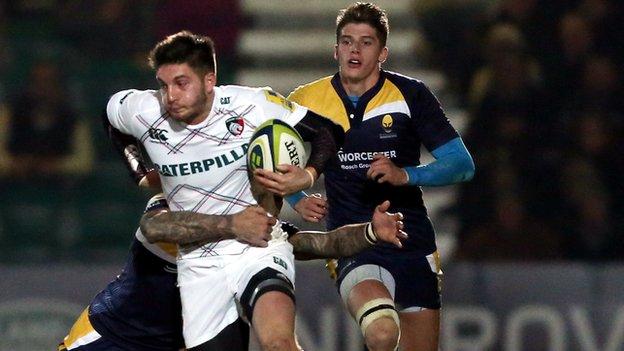 Leicester youngster Owen Williams has warned his team-mates not to under-estimate Premiership bottom club Worcester at Sixways on Friday.

Williams was part of a second-string Tigers side who won narrowly 21-18 in the LV= Cup at Sixways in November, kicking 11 of his side's points.

Leicester are weakened by injuries and international calls again on Friday.

"We know Worcester are going to fight for everything and we have to be switched on," said Williams.

They will also lose a young trio to England Under-20s duty, winger Henry Purdy and flanker Will Owen, while prop Harry Rudkin is on the bench.

And, with former England stand-off Toby Flood now focused solely on Leicester, following news of his impending move to France, it will still be a strong Tigers side.

Worcester are going to come out all guns blazing

"It's a big period for us while the England boys are away, but we are not looking too far ahead," insists 21-year-old former Scarlets stand-off Williams, Flood's deputy.

"Worcester are going to come out all guns blazing.

"They need to win games. We know it's not an easy place to go."

Worcester, renowned for their home record in recent seasons, have now managed just one win at Sixways in 11 months.

That was in the Challenge Cup against Oyonnax last month - and they have not won in the Premiership on home soil since beating Wasps on 1 March last year.

Dean Ryan's side have managed just three points from their 12 games so far this season.

And, at a time when they are already planning the reconstruction of their squad for what is expected to be Championship rugby next season, it would be a surprise if Worcester, beaten 32-15 at Welford Road in September, ended their losing run on Friday.