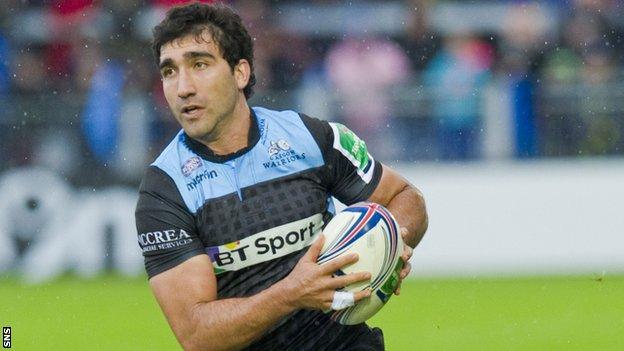 The 25-year-old, who joined last summer on a 12-month deal, has been ruled out of 'contact' rugby for six months because of a neck injury.

"We have a number of players away with Scotland and a few injuries in our backline, so Lee joining us is very welcome news," explained Townsend.

"I'd like to thank Edinburgh Rugby and Scotland Sevens for loaning Lee to us.

"Lee is in great physical shape and has been in try-scoring form for Scotland Sevens.

"I know him well from my time coaching with Scotland and he will fit in well at Scotstoun.

"He will be joining us [on Thursday] from the Scotland Sevens camp in New Zealand, so we expect him to be available for this weekend's game against Connacht."

Wing Jones, 25, has been with Edinburgh since 2010 and has four senior caps for Scotland.

But Warriors have agreed to Ascarate's departure after he made just five appearances for the club.

"He fitted in really well and would've played a big role in the second half of the season," said Townsend. "We agreed to allow him to return home."

"Although he will not require surgery, he has been advised not to take any contact for six months, so we agreed to release him from his contract early to allow him to return home.

"We'd like to thank Gabriel for his contribution to the club during his time here and we wish him well for the future."