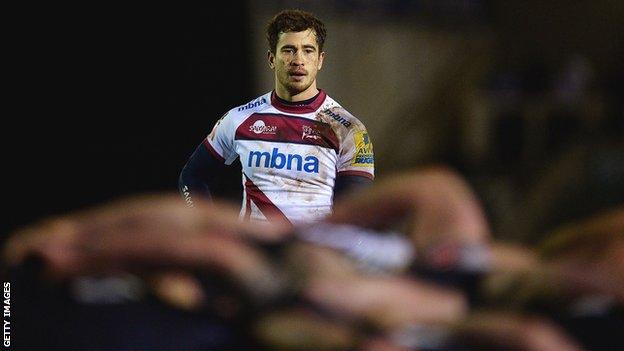 Danny Cipriani says it is pleasing to know that he is in the thoughts of England head coach Stuart Lancaster.

The Sale fly-half, 26, has not featured at international level since 2008.

Cipriani's impressive form for the Sharks this season has although he for the Six Nations.

"I had a good chat with him [Lancaster] before the squad was announced and it's good to know that Cipriani told BBC Radio Manchester.

"I've just got to keep working at what I'm doing and keep improving.

Club appearances: 16 (including 5 as sub)

"I've always got on well with Stuart and he's done a great job with England so far. They were so unlucky not to win [against France] at the weekend.

"His communication lines are open and it does give players confidence. It makes me look forward to this next part of the season. We've got four big games ahead and that block of four games can shape where we finish the season."

Cipriani's main concern for now, however, is to help Sale build on a solid start to their Premiership campaign.

Steve Diamond's side, who were in a relegation battle for much of last term, are currently seventh but lie just three points behind fourth-placed Harlequins.

Former Wasps man Cipriani is with the Manchester club and says he will seriously consider extending his current contract if Sale's progression continues.

"Signing someone like [former Scotland forward] shows that the club are looking to move forward and make some good signings," he added.

If I feel like we're going to be part of a team that's going to keep pushing towards the top four, it's a club I'd like to stay at

"We're potentially losing some valuable players but if the calibre of replacements are going to be players like that, then happy days.

"It's about being at a club with ambition. That's what everyone wants and Sale are showing that. If I feel like we're going to be part of a team that's going to keep pushing towards the top four, it's a club I'd like to stay at."

Dwayne Peel is one of the players leaving Sale at the end of the season, the Wales scrum-half having already

Diamond revealed talks with three possible replacements are ongoing, telling BBC Radio Manchester: "One of them is outpricing himself, we're meeting the other two again, and then we'll make our decision.

"[Sale head coach] Bryan Redpath will have quite a lot of say on that, being a world-class scrum-half as he was."