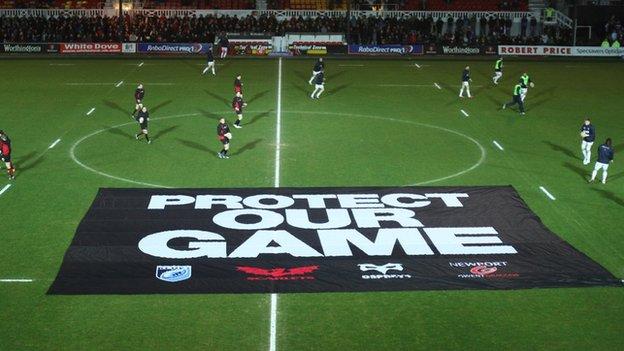 The Welsh Rugby Union has accused Ospreys backer Robert Davies of making a series of "incorrect assertions" in a radio broadcast on Tuesday.

Among his claims, Davies denied Wales' regions were open to the idea of more players signing national contracts.

However, the WRU says "meaningful discussions" are continuing with the regions, and those include contracts.

"Exchanges of information and discussions continue and the WRU is grateful to the regions," the WRU says.

The governing body's statement on Wednesday is the latest twist in the dispute between the WRU and Wales' four professional teams - Ospreys, Scarlets, Blues and Dragons. Key issues in the dispute are contracts, the exodus of top players, competitions and distribution of income.

The four regions are represented by umbrella body Regional Rugby Wales and Davies was speaking in a personal capacity when he appeared on Radio Wales Sport.

Davies claimed the WRU has not debated the issue of central contracts with the regions and this issue was "just something that has been put on the table... it's not been debated as to whether or not it's good for Wales [or] bad for Wales".

Wales captain and Blues flanker Sam Warburton made history by becoming the first to sign a central, or national, contract with the WRU.

Warburton's team-mate Leigh Halfpenny has opted to join French club Toulon, while their fellow British and Irish Lions star Alun Wyn Jones re-signed with his region, the Ospreys and another Osprey, Wales prop Adam Jones, is out of contract at the end of the 2013-14 season.

Two other players have also been identified as potential recipients of central contracts - Wales and Scarlets fly-half Rhys Priestland and centre Jonathan Davies.

In response to Davies, the WRU revealed more detail around discussions over its proposed rugby services agreement with the regions - a document setting out the contractual relationship between the parties. The current agreement expires in June.

The WRU said: "On 26 January 2014, the regions issued a detailed note to the WRU outlining their views on specific matters related to the rugby services agreement. Within that note, national contracts were referred to with specific questions posed by the regions for further discussion.

"The WRU will not provide details of this confidential document, but it is important that the Welsh rugby public is aware that meaningful and relevant discussions are continuing between the WRU and the regions.

"It is important to explain that contrary to Mr Davies' assertion, the original six players under debate within the national contract discussions were players that had been named by the four regions as key to be kept in Wales if possible."

Amid doubts over the future of European competitions, Robert Davies had also said an Anglo-Welsh competition could be the four regions' only future competitive option - a move opposed by the WRU.

In its response on Wednesday, the WRU added discussions over European competitions for the 2014/15 season onwards were progressing "through the involvement of stakeholders under the auspices of the International Rugby Board".

Another worry for the regions - and for teams from the other five nations who have participated in the Heineken Cup this year - is the delayed payment of £800,000 for participating in the tournament this season.

The regions claim this instalment had been scheduled to be paid last week by ERC.

ERC, however, had said the decision to seek board approval for each instalment in advance was made at a board meeting in September when the regions were represented by RRW chief executive, Stuart Gallagher. The WRU supports the ERC version of events.

Gallagher has since resigned his ERC position, and the WRU had urged the regions to be represented at a meeting in Dublin on Wednesday which will discuss the payments.

But Davies claimed the regions would not turn up, saying: "We are not going to turn up there as one vote among many and just be like a nodding donkey. There's just no point."

The BBC has asked Regional Rugby Wales for a response.