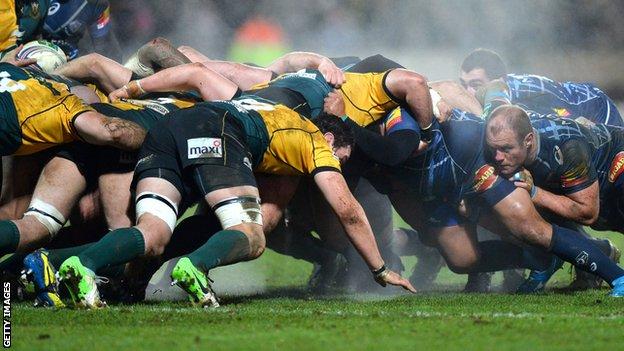 Sanderson, while working as a pundit on television, said Saints were operating an illegal scrum during the LV= Cup win over Newport last week.

"I don't understand how he benefits from saying things like that," West told BBC Radio Northampton.

"I took it to heart. I thought it was out of order and miles off the mark."

Northampton have the meanest defence in the Premiership this season.

They have conceded 169 points this tem - two less that Saracens and Harlequins.

Sanderson, 36, played 16 times for England and represented Sale, Harlequins and Worcester before retiring with a shoulder injury in August 2011.

His main issue with the Saints scrum seemed to be with how the ball was being put in.

In response to a tweet from Saints and England prop Alex Corbisiero, he said: "You don't need a degree to understand what straight and square looks like!"

West, a 23-time capped former England hooker, has pointed towards the number of Saints forwards among the current England setup as a defence of his side's scrum.

Dylan Hartley, Tom Wood, Courtney Lawes and Corbisiero - who is currently injured - are all in Stuart Lancaster's squad.

"It's very disappointing to hear those sorts of comments from somebody I'm sure doesn't put that much time and effort into thinking about scrummages.

"I watch scrummages nearly every day of my life and people say I'm a bit nauseating about it, but that's what we do.

"Someone who watches a few scrums on the weekend as a bit of fun as a sideline to his normal job - it's particularly disappointing as I don't feel he understands it."