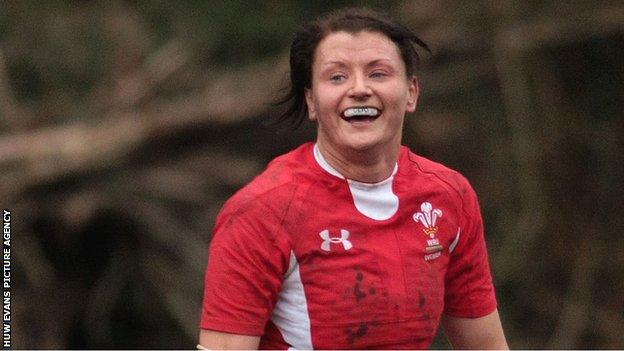 Captain Rachel Taylor returns to the starting line-up among three changes to the Wales Women's side to face Ireland at Ashbourne on Friday (19:30 GMT).

Taylor will pack down at number eight, Shona Powell Hughes starts in the second row, while Rebecca de Filippo gets the nod at centre.

Wales on Sunday in Aberavon and will seek to get their campaign back on track in Ireland.

"I think we missed her leadership a bit. The three who come in all made an impact from the bench against Italy so it's good to have that strength in depth."

The trio's inclusion causes four positional changes, with centre Elen Evans moving to the wing from midfield, while Robyn Wilkins moves out one spot to outside centre.

Catrina Nicholas switches from eight to flanker, while Nia Davies moves from lock to the back-row.

Flanker Sian Williams and winger Laurie Harries drop down to the bench.

"The changes we've made in the forwards gives us a much better balanced pack, it's all about getting the combinations right," Edwards added.

"We've moved Nia Davies - who I thought was exceptional against Italy - back to the back-row from the second row, while in the backs we've brought in Rebecca [de Filippo] so Robyn [Wilkins] will play at 13."

Edwards is under no illusions as to the size of the task that awaits his squad, particularly as Ireland romped to a comfortable 59-0 victory over Scotland last weekend to get their defence of the title off to a winning start.

"We are fully aware of what Ireland can do and where their major threats come from. We just have to concentrate on trying to nullify their threats and take our chances when they come," Edwards said.