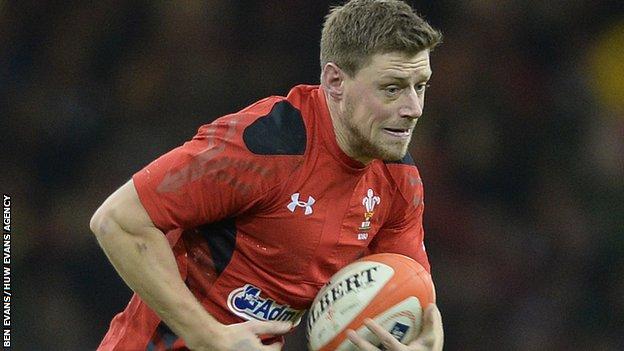 Rhys Priestland believes Wales' defensive abilities will be tested to the full in Saturday's Six Nations clash against Ireland in Dublin.

Wales conceded three tries to Ireland in the opening game of the 2013 tournament.

But following that Wales achieved defensive shut-outs in the next four games against France, Italy, Scotland and England to lift the title.

"Defensively, we are going to have to be at our best," insisted Priestland.

It will be a massive test, defensively, to keep them quiet

"It will be a massive test, defensively, to keep them quiet.

"We need to improve with the ball in hand from last week, but defences win you championships.

It might only be the second round of the tournament this weekend but the winners of Saturday's clash at the Aviva Stadium will seriously enhance their championship credentials.

Both teams won in round one - Wales beat Italy 23-15 and Ireland overpowered Scotland 28-6 - to set up a mouth-watering Dublin encounter.

Wales have triumphed in three of the last four meetings against Ireland, including a 2011 World Cup quarter-final success, but Brian O'Driscoll inspired an Irish win on Welsh soil 12 months ago.

"It is a massive challenge, and there is a buzz about the place looking forward to combating whatever Ireland throw at us," fly-half Priestland added.

"It will be hostile there and they will be desperate to stop us going for the third title (in succession), and we are desperate to win it.

"We are looking to test ourselves against a very good Irish team which could have beaten the All Blacks last year. We are under no illusions about how difficult it is going to be.

"The way they have been speaking about the game and the way they should have beaten the All Blacks means they are on a massive high, and it could possibly be our toughest challenge."

The individual head-to-head contests are intriguing - Priestland against Jonathan Sexton, Mike Phillips versus Conor Murray, and Adam Jones against Cian Healy among the pick of those battles .

"He [Sexton] is a Lions 10 and a fantastic player," Priestland said.

"I have played against him a few times and we know as a squad how dangerous he can be, especially with the understanding he has with O'Driscoll.

"Both back-lines are very talented. Everyone knows how dangerous and powerful our backs can be. Their back-line is different to ours, and who is to say which is best."