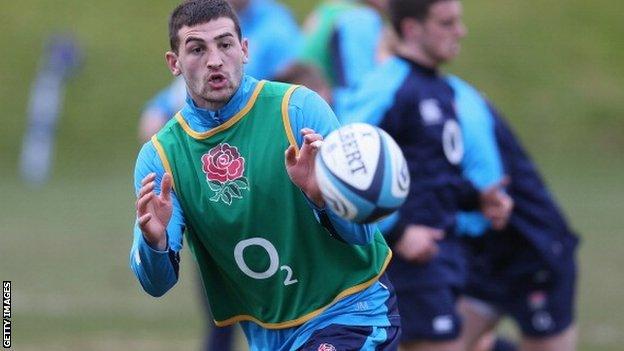 England head coach Stuart Lancaster has kept faith with the side which lost to France and named an unchanged line-up for Saturday's match against Scotland.

Gloucester's Jonny May starts on the wing despite breaking his nose nine minutes into the 26-24 loss in Paris.

As we found two years ago, Murrayfield is a tough place to play

Courtney Lawes will be in the second row after his cheekbone bruising eased, while Danny Care and Owen Farrell form the half-back partnership.

"They're determined to put last week's result behind them," said Lancaster.

England will be hoping to avoid a third successive Test defeat, having lost to New Zealand at the end of their autumn campaign and France on the opening weekend of the Six Nations.

Scotland, however, were well beaten by Ireland on Sunday and have not prevailed in the annual Calcutta Cup clash since their 15-9 win at Murrayfield in 2008.

"Scotland will be hugely motivated by their defeat in Dublin and, as we found two years ago, Murrayfield is a tough place to play," added Lancaster, who began his England reign with a 13-6 win against Scotland in 2012.

May is not expected to wear a protective face mask when he wins his third cap in Edinburgh.

Luther Burrell, who scored on his debut at the Stade de France, will make his second Test appearance at centre, while Jack Nowell takes up the right-wing spot for what will also be his second cap.

Wasps prop Matt Mullan will travel as the 24th man.