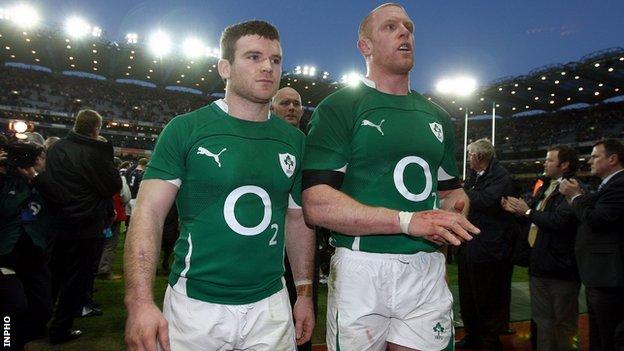 Paul O'Connell and Gordon D'Arcy are back in the Ireland team for Saturday's eagerly anticipated Six Nations clash against Wales in Dublin.

Skipper O'Connell is named in the starting line-up after missing the win over Scotland with a chest infection.

The Munster second row comes in for Dan Tuohy after resuming training with the rest of the Irish squad on Thursday.

D'Arcy, who was also ruled out of his side's opening game, replaces Ulster's Luke Marshall at inside centre.

O'Connell was a late withdrawal from Sunday's match at the Aviva Stadium after being unable to sleep because of a chest infection the night prior to the game.

Tuohy returns to the replacements' bench while D'Arcy will partner Brian O'Driscoll in the Irish midfield for the 53rd time.

Leinster pair Luke Fitzgerald and Eoin Reddan were not considered. Wing Fitzgerald was unavailable for Sunday's 28-6 victory over Scotland because of a hip injury, while a calf strain ruled out scrum-half Reddan.

With Fitzgerald missing out, Ulster wing Andrew Trimble, who scored the first try against Scotland, holds onto his starting role.

Full-back Rob Kearney was rested from Tuesday's light training session because of a leg knock but his fitness for Saturday's match was never in serious doubt.

Irish coach Joe Schmidt said their Welsh opponents "had a lot of strengths" and "pinpointing any weaknesses is difficult".

"Man for man they are a very big side and we are going to have to be fairly smart about the way we play," observed Schmidt.

"There are one or two things we will try to implement on Saturday but we'll have to assess post-match whether they have worked or not.

"The first three days after the Scotland match were largely used for recovery as the match was played at a reasonably high tempo, so we've just been keeping a lid on things training-wise.

"I know they've been outspoken about some scrum decisions and that's one of the things they will look to strengthen."