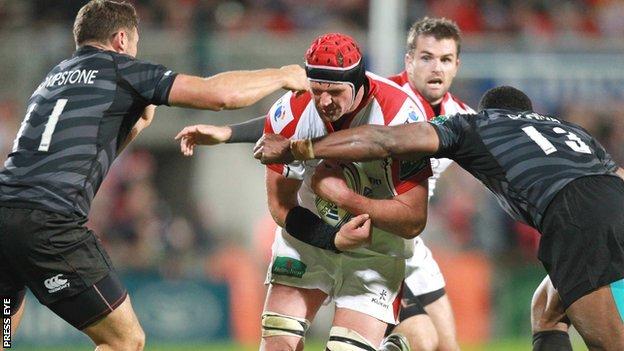 Ulster captain Johann Muller has announced that he is to retire from playing rugby at the end of the season.

The 34-year-old lock joined the Irish province in the summer of 2010 and has made 73 appearances so far.

He has skippered the side since the start of the 2011-12 season and led the team out for the Heineken Cup final against Leinster in May 2012.

Muller won 24 caps for South Africa and was part of the squad which won the Rugby World Cup in 2007.

His last appearance for the Springboks was in 2011, when he appeared in the second-half against Wales.

Fellow forwards John Afoa and Tom Court will also leave the Irish province at the end of the season.

Ulster have reached the quarter-finals of the Heineken Cup in each of the four seasons that Muller has been at Ravenhill.

Muller also captained the team in the Pro12 final last season, with Irish inter-provincial rivals Leinster proving too strong on that occasion.

The second row has struggled with injury of late, though, and a calf problem has kept him out of action for much of the present campaign.

The Springbok, who moved to Ulster from Natal Sharks, was also ruled out for several weeks during last season because of arm and hand injuries.

"I still believe that I am playing well enough but I just feel from my body's point of view that the time is right to step away," said Muller.

"I have enjoyed my time at Ulster so much. The last four years have possibly been the best of my rugby career. My family has been so happy here and we have been made to feel really welcome in Belfast.

"There is still a lot of rugby to be played. Nothing has changed for me. Every time that I take to the field I want to win.

"I am excited about these last four months, about where we are as a team and what we are capable of achieving."

Ulster's director of rugby, David Humphreys, added: "Johann has been an outstanding player for Ulster Rugby. He is everything you want from a captain - he leads from the front, he is exceptionally committed and he is an inspiration to everyone else around him.

"I remember very clearly sitting with him in Durban, outlining the vision that I had for the team and for Ulster Rugby. He has been the catalyst for the huge strides that we have made in recent years and has made an immense contribution to the Province, both on and off the pitch.

"I know that over the next four months that he will be more determined than ever to help deliver success to Ulster and that he will be aiming to end his career on a high."