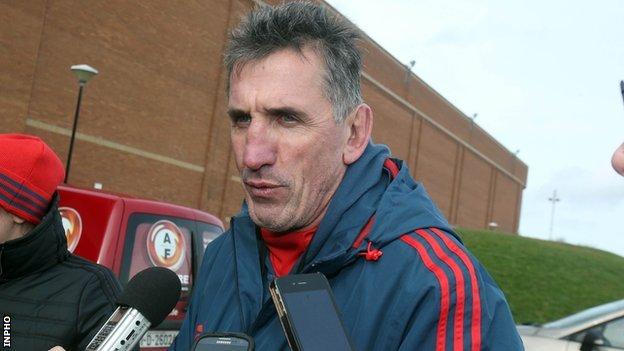 New Zealander Rob Penney is to step down as head coach of Irish province Munster at the end of the season.

Penney and backs coach Simon Mannix joined the Munster set-up at the start of the 2012-13 season but are the subject of interest from another club.

Penney initially agreed a two-year contract, with the option of a third, but has declined the extension offer.

Munster reached the Heineken Cup semi-finals last year and are into the last eight of this year's competition.

The Irish province are currently top of the Pro12 standings, having finished sixth in the last campaign.

They have won 15 of their 18 competitive fixtures this season, but the former Canterbury coach has opted to move on.

"The terms and conditions of an extension had been agreed by the Munster Professional Games Committee and the IRFU but Rob has since attracted the interest of another club and there are terms on offer that are in line with Rob's long-term needs," confirmed a statement from Munster Rugby.

Munster Rugby chief executive Garrett Fitzgerald said: "When we reach the end of the season Rob will leave with our thanks and best wishes for the future.

"Rob has been a very positive influence on this Munster squad and management and we are disappointed to see him go as we had hoped that he would fulfil his third season.

"In developing the squad he has highlighted the strength and depth of the Munster panel, with the competition for places as high as ever.

"I would also like to take this opportunity to thank Simon for his work and commitment to the province, and we wish him all the best for the future. He has contributed to Munster's overall campaign and added great value to our coaching team.

"We now need to focus on the remainder of this season and the opportunities ahead in both the Heineken Cup and the Pro12.

"We are confident both Simon and Rob will continue to strive for success and guide the squad through to the next stage."

Penney commented: "I am disappointed to be leaving Munster as I have thoroughly enjoyed my time here. I have to take this opportunity presented to me and prioritise my family and personal circumstances at this time.

"We still have a few months to go and the goals remain the same - I want to achieve success with this great group of lads."