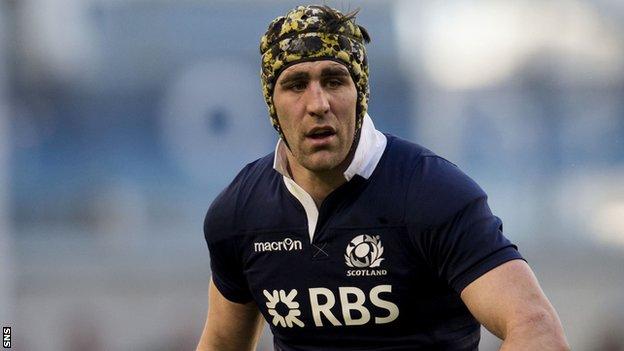 Captain Kelly Brown has been dropped from the Scotland squad for Saturday's Calcutta Cup match against England.

He is replaced in the back row by Chris Fusaro, who will earn his first cap at open-side flanker.

Scrum-half Greig Laidlaw takes over the captaincy in Brown's absence, while lock Richie Gray is another to drop out of the 22 altogether.

Being the Calcutta Cup, there's no better game to get your first cap - I'm still pinching myself

Gray, who toured with the British and Irish Lions, was on the bench in the opening Six Nations defeat by Ireland and his spot among the replacements goes to teenage brother Jonny.

Scotland head coach Scott Johnson said it was a difficult decision to drop Brown but believes Fusaro will cause England problems.

"Fusaro is picked to do a certain role and we believe there's an opportunity for him to do it," said Johnson.

"England are powerful, they have an edge to their side and are assertive and aggressive.

"They will probably consider themselves unlucky last weekend but it's not always brute force that wins these games."

Johnson said Brown, capped 61 times, was "disappointed" by the decision, adding: "We felt the balance wasn't right in the team. We needed a ground feeder and Chris fits that."

"I wasn't necessarily surprised with Kelly being dropped because I think the balance of the back row hasn't been right for a while. Chris Fusaro comes in as an out and out open-side flanker but the surprise was the Scottish pack last week in Dublin were badly beaten. The scrum didn't function, the line-out really fell apart at times, yet Brown is the only player to lose his position so I was surprised there wasn't more changes. I'm delighted Fusaro has got a chance as an out and out open-sider because I think that's the blend Scotland need in that back row"

On Brown's international future, the Australian interim coach said: "Performance is the key for going forward.

"He has a lot of runs on the board. To make this team, it's going to have to be at number seven and there are elements of his game he needs to improve on. The answer lies in his ability to take this on board."

Brown, 31, later took to Twitter with the message: "Obviously gutted to be missing out on the Calcutta Cup on Saturday, but that's sport. Really hope the lads will go well."

"He possesses natural aerial skills from his time in Ireland," said the coach. "Every time he has gone up in class, his skills have transcended."

Johnson said it had been a tough decision dropping Taylor to the bench but said the Saracens player had the ability to cover a number of positions in the backline.

Hooker Scott Lawson is preferred to Pat MacArthur on the bench.

Fusaro said he was "absolutely delighted" to be facing England, adding: "Being the Calcutta Cup, there's no better game to get your first cap. I'm still pinching myself a bit."