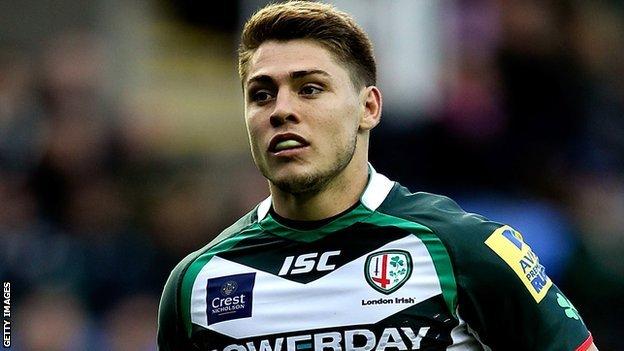 London Irish back James O'Connor has agreed a deal with Toulon, according the French Top 14 club.

O'Connor, 23, joined the Exiles in October until the end of the season.

However, it is understood that the contract with Toulon is closer to six months - something that would free him up to earn a 2015 World Cup place.

O'Connor had intended to return to Australia in a bid to force his way into the Wallabies squad, but a year-long move to France would hinder his chances of doing so.

Wallabies coach Ewen McKenzie has said that anyone who wants to be picked must play for an Australian province in 2015.

A six-month contract though would take him up until the end of December freeing him up to play Super Rugby next year - with the full-back currently having two options.

At Toulon, O'Connor would link up with former Wallabies Matt Giteau and Drew Mitchell, as well as other new signings in the shape of Wales internationals Leigh Halfpenny and Ian Evans.

The 44-times capped back was told he would not be offered a contract with Australia for 2014 after a disciplinary investigation found he had "failed to uphold the behavioural and cultural standards expected within the team".

In October, he was escorted from Perth airport for drunken behaviour, but believes his move to London Irish has helped him refocus on his career,

Last month, O'Connor told BBC Radio Berkshire that he still hoped to force his way into McKenzie's plans for 2015.

"I've been very open about the fact I want to go back to Australia so I can play in the World Cup," he said.

"Playing for my country is what I always wanted to do and missing out on the spring tour and November internationals was pretty hard to watch.

"I want to be wearing the gold jersey so I've got to be back for a whole Super Rugby season to play in 2015 and that is what I'm working on."