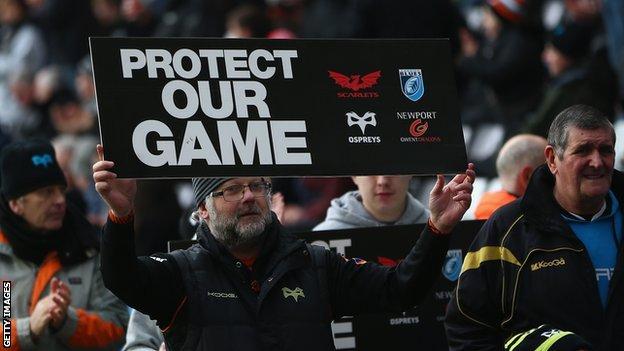 They were hoping to receive £200,000 each on Wednesday but will have to wait for another two weeks to learn whether the money will be paid to them.

Meanwhile the Welsh Rugby Union has offered to discuss lending money to the regions to cover the shortfall.

The WRU says loan requests from the regions would be considered "positively, as a matter of urgency".

A WRU statement confirmed that European Rugby Cup Ltd (ERC) were withholding payments as they seek to clarify what liabilities they would suffer should they be forced to wind up in the summer.

That possibility has come about because England's leading clubs will not play in ERC-run tournaments from the end of the 2013-14 season.

The European rows, centring on commercial rights and governance issues, have led to the possibility of Wales' regions joining their English counterparts in the Aviva Premiership from the end of this season.

The ERC board is made up of club and union representatives from England, France, Ireland, Italy, Scotland and Wales.

The Welsh regions - Ospreys, Scarlets, Cardiff Blues and Newport Gwent Dragons - were represented on the board by Regional Rugby Wales (RRW) chief executive Stuart Gallacher, who has since resigned.

The governing unions in Wales, England, Ireland, Italy, Scotland and France have committed to a new Heineken Cup tournament, which would be shown by current broadcast partners Sky.

The English Premiership clubs insist they will not take part and have proposed a rival cross-border competition, the Rugby Champions' Cup, which would be broadcast by BT Sport.

The Welsh regions favour the new tournament as they claim it guarantees them extra revenue, putting them at odds with the WRU.

ERC owe the English clubs £1.6m, with Premiership Rugby (PRL) saying they will now seek advice on whether ERC's decision constitutes a breach of contract.

"We believe this inflames the issues we have in coming to a European solution and the next step is for Premiership Rugby to take advice to see if this action represents a fundamental breach in the contract between ERC and its clubs," said PRL in a statement.

While all of this is resolved, the WRU said they had "offered to consider a loan facility for the four regions to temporarily cover their postponed ERC funding payment.

"All the regions have indicated publicly that the payment delay is causing them serious financial consequences.

"The WRU is prepared to cover the full amount of postponed payments on a temporary basis, subject to the loan getting formal WRU board and bank approval.

"The loan offer was made to the regions before the ERC board meeting on Wednesday, 5 February when the postponement of payment distributions was confirmed.

"If the WRU receives a request from the regions the governing body would consider it positively as a matter of urgency.

"The ERC board has unanimously agreed to postpone all further payment decisions, including the release of further instalments of ERC's distributable central revenues to the six shareholder countries, until 19 February when the board will meet again."