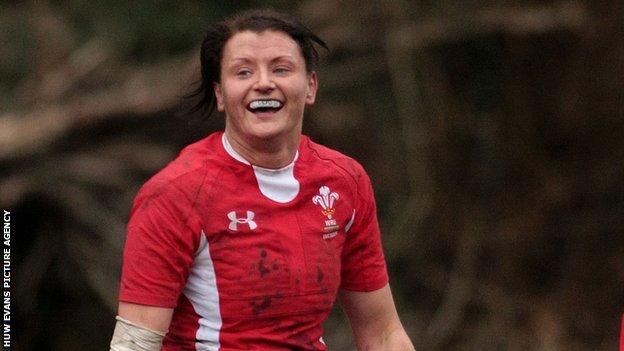 After a shock opening defeat by Italy in their 2014 Six Nations opener, Non Evans highlights the task facing Wales' Women against their Irish counterparts, the reigning champions, on Friday in Ashbourne, County Meath (19:30 GMT)

For Wales it's all about making their chances count, turning pressure into points, and making up for the game that was there for the taking against Italy.

Wales' biggest issue last weekend was their failure to capitalise on their line breaks. They made four or five clean line beaks in the first half, but failed to score.

Also they could not deal with Italy's driving line-out and both of the visitors' tries came from rolling mauls.

I am sure this is something forwards coach Liza Burgess will have been working on in training this week. The Welsh pack is lightweight compared with most teams, but the changes should make a difference.

The Six nations is all about building towards the World Cup in France August and although winning breeds confidence I believe the coaches will be just as interested in performance as results at this stage in the season.

Since winning the 2013 Grand Slam, the Irish team's stock has risen dramatically and they have secured more sponsorship than ever.

They will have huge support but let's hope Wales can silence the home crowd.

Rhys Edwards' side were bitterly disappointed with the loss at Aberavon against Italy.

But it will be tough for them against an Ireland side who scored an impressive 11 tries in their win over Scotland last weekend.

Wales though are boosted by the return of captain and number eight Rachel Taylor, and the only other change in the pack is a start for Shona Powell Hughes, who came off the bench last week, in the second row.

In the backs, Rebecca de Filippo returns to strengthen the midfield, while Elen Evans moves to the wing.

Last week's stand-in captain, prop Catrin Edwards, will win her 50th cap. She is in the form of her life and will be hoping to celebrate this milestone with a win.

Ireland have continued where they left off last season and their squad has been strengthened further with the return of the impressive Niamh Briggs at full-back.

Briggs also has a very accurate boot so discipline will be key for Wales.

Elsewhere in the tournament, on Saturday France are favourites to beat Italy despite losing to them for the first time in last year's campaign.

And I fear another tough afternoon for Scotland on Sunday following England's narrow loss in France last weekend.

With the World Cup less than six months away, every nation will be looking to build their structures during this campaign and blood plenty of youngsters to strengthen their squad ready for the tournament in France.

And if Wales need an inspirational glimmer of hope against Ireland, they might find it in looking back at their 2013 encounter, when they lost to the eventual champions by only two points.