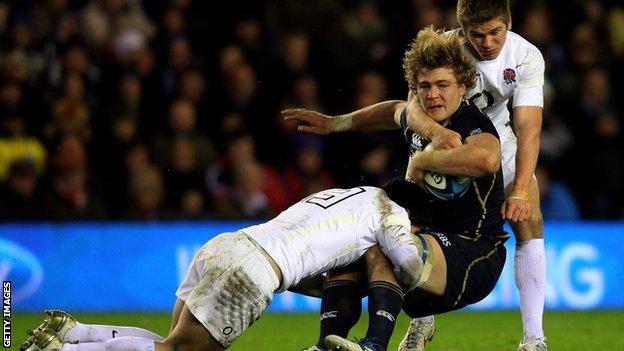 Scotland's David Denton says playing England is the peak of any Scot's career ahead of Saturday's Six Nations meeting at Murrayfield.

"There is no bigger match in world rugby from our point of view," the number eight told BBC Scotland.

"And I think we are capable of getting on top of them this weekend."

England hooker Dylan Hartley says he expects Scotland to be "very physical and quite lumpy up front" despite their decision to drop captain Kelly Brown.

Debutant Chris Fusaro is promoted at Brown's expense with Tommy Seymour replacing Sean Maitland on the wing, as England name the same side that suffered a 26-24 defeat away to France last weekend.

England have only won once in their last four visits to Murrayfield and Denton believes that Stuart Lancaster's side will have to overcome a typically partisan crowd as well as his team to win.

"The atmosphere will be incredible," added the 24-year-old. "The entire country buys into it and I hope we can give them something to celebrate.

"We owe ourselves a good performance. There is an incredible amount of talent in this team and we need to make sure we get on the front foot and win the territory and possession battles to give these players the chance to do what they are capable of."

Scotland rarely threatened the try-line in a 28-6 defeat to Ireland in their own tournament opener, but they secured Six Nations wins over England in 2006 and 2008 with all their points coming from the boot.

Both those victories came in wind and rain, and similar conditions could be in store with the Murrayfield pitch weakened by a parasite infestation and wet weather preceding kick-off.

According to Hartley, England want to play an expansive game regardless, but must overcome the challenge posed by the Scottish pack.

"They have a big, lumpy pack who can go toe-to-toe with most," he said of Scotland.

"It's not about them not being good enough, it's just them playing to their strength. It's smart rugby."

"If we can match them there, get parity or dominance, then get our carrying and handling game going, get them moving around, that's when we can find gaps to exploit."

While Scotland have recorded only 11 wins in the last 10 years of the Six Nations, centre Matt Scott believes that England will be the team under pressure with another defeat spelling the end of the visitors' realistic hopes of reclaiming the Six Nations crown they last won in 2011.

"We go into the game as underdogs but England have a lot of pressure on them as well after losing to France," he said.

"There has been a lot of honest talk, a lot of things said that are not nice to hear but it needs to be done at this level of rugby.

"I watched Scotland over the years before I was playing and just when everyone is writing us off, we come back with a great performance.

"I really hope that's the case this weekend."