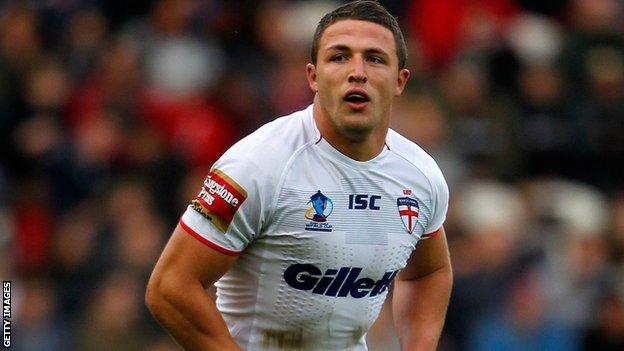 England league international Burgess, 25, is in talks with union side Bath.

"I would be surprised if the 2015 World Cup was too soon for him to make the England side," Guscott told BBC Sport.

England rugby league coach Steve McNamara also backed Burgess to succeed if he makes the switch, saying he has "all the attributes to be probably whatever he wants to be."

Guscott believes that Burgess, who plays for the Australian side South Sydney Rabbitohs alongside his brothers Luke, Tom and George, could make an even more successful transition than New Zealand dual-code international Sonny Bill Williams.

Williams began his career in rugby league, won the union World Cup with New Zealand in 2011, and switched back to league where he was a losing finalist in last year's World Cup.

"Burgess is a superstar in rugby league. He could have a bigger impact in the game of union than Williams did," Guscott added.

"He is certainly as big, if not bigger, than Sonny Bill Williams in Australia's NRL and if he does come to union it is without doubt an unbelievable signing, whichever club he may play for.

"What he's capable of producing on a rugby pitch is nothing short of spectacular.

"He uses his weight and power well and has the full range of handling skills. If he can adapt quickly enough he will challenge all the current England centres for a place in the line-up."

League forward Burgess began his career with Bradford Bulls, where he was given his Super League debut by McNamara at the age of 17.

"Hopefully, he'll stay in rugby league and hopefully he'll continue to be part of the Souths and England rugby league team," said McNamara.

"Sam is the jewel in the crown of rugby league at the minute but I'm sure he will make the best decision for himself.

"I just think he's a fantastic physical specimen. He's got great skills and is quick for a big man. I am sure, if he did decide to change sports, he would be a success."

Burgess moved down under in 2009 but came back to prominence in his homeland during the 2013 Rugby League World Cup, putting in a number of aggressive performances as England reached the semi-finals.