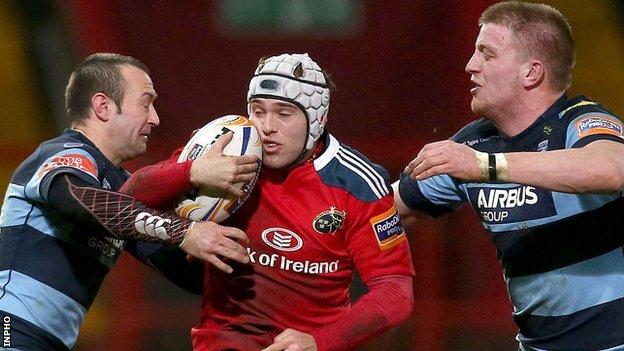 Munster recorded their biggest win of the season to move seven points clear at the top of the Pro12 table.

They scored three of their six tries while Cardiff replacement prop Patrick Palmer was in the sin bin.

Cardiff were only 19-13 down at half-time but that run of tries - Simon Zebo and Gerhard van den Heever added to a penalty try - put the hosts in control.

Centre Owen Williams scored the try for the Welsh region and at that point they were level at 10 points each.

But Munster took over and, with their bonus point secured, the Irish province added some late gloss as Andrew Conway and CJ Stander both went over, with out-half JJ Hanrahan brilliantly landing 10 kicks from as many attempts for a 24-point tally.

Despite the difficult wet conditions, Hanrahan and Gareth Davies swapped penalties before direct running from captain and man-of-the-match James Coughlan took him close to the try-line, and prop David Kilcoyne plunged over from the ensuing ruck.

Hanrahan converted but the Blues hit back within three minutes, Harry Robinson countering from a loose kick and breaking free on the right wing to send centre Williams over in the corner.

Davies swung over a cracking conversion kick to bring the visitors level at 10-all.

Former Cardiff centre Casey Laulala and Johne Murphy led an assault down the right wing as Munster got back on course, with successive penalties following from Hanrahan's right boot.

The Blues picked up a penalty on the half hour which Davies slotted for 16-13.

However, the gap was out to six points after Hanrahan punished Cardiff skipper Sam Hobbs for not rolling away on the stroke of half-time.

The second half was rather listless until Munster put pressure on in the scrum and a series of indiscretions saw Palmer yellow-carded by referee Giuseppe Vivarini.

The resulting 60th-minute scrum, which included replacement Thomas Davies, was also dropped and Munster were awarded their penalty try which Hanrahan converted.

Full-back Zebo celebrated his first start since October with a well-taken try, following a final pass from Coughlan and a barnstorming run in the build-up from prop James Cronin.

Hanrahan booted the ball wide for South African Van den Heever to run in from the right for the bonus-point score, and the half-century was in sight after replacement Conway dribbled through and dived for try number five.

Television match official Seamus Flannery confirmed the grounding and he was also involved in the awarding of flanker Stander's injury-time try, a powerful drive and stretch for the line.