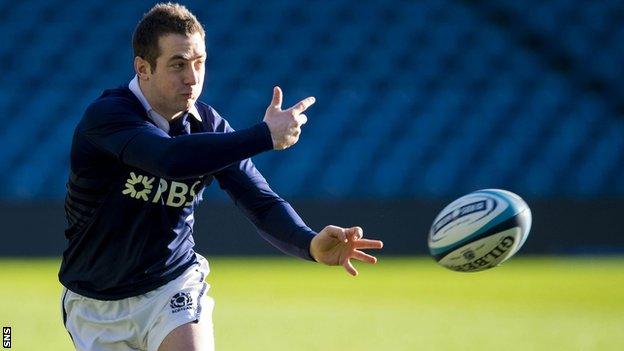 New captain Greig Laidlaw says Scotland will be at their best when they face England because they are coming off the back of a bad performance.

The Scots go into the Calcutta Cup clash following a heavy defeat by Ireland.

The performance was branded "dismal" and "a shambles" by the coaches.

"We don't need to hype it up, traditionally this is when we're at our best," said Laidlaw, who as captain.

I don't believe England lost to France on Saturday because of Stuart Lancaster's replacements strategy.

"Scotland v England games will always have blood and guts in there. Coming off the back of a bad result, we want to rid that performance out our system. The only thing we can do is put it right tomorrow."

"It's tough or Kelly," said the Edinburgh back

"He's obviously a very proud man. But it's a measure of the man that he's been right behind us this week. Kelly and I are good friends and he'll be back in this Scotland side, I'm sure of that."

Scott Johnson admitted dropping Brown and starting with Chris Fusaro was "one of the hardest decisions I've ever had to make as Scotland head coach".

"There is a human side to this job," he explained.

"We are in the people's business and if you don't care for people you shouldn't be in it. I care for him and it was a tough decision.

"He's a guy I admire but it was the right decision. Using my vernacular, Chris is a ground feeder. He's low to the ground and plays below a lot of people.

"The ball will be on the ground a bit and he reminds me of the type of player back home.

"His regional form has been good. I've asked him to change some things and to improve some things in his game and he has done that, so he deserves his run out."