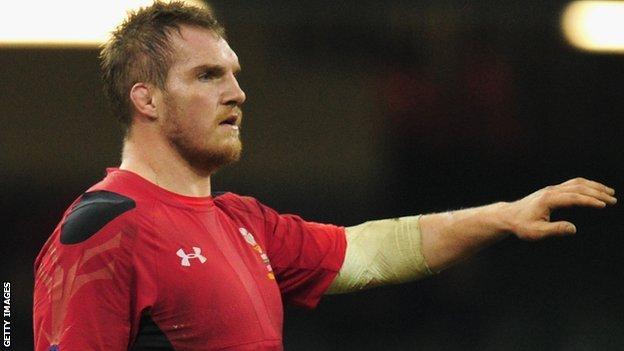 Prop Gethin Jenkins says Wales must rise to the challenge of facing an Ireland team he believes are serious Six Nations title contenders.

The teams meet in Dublin on Saturday, each bidding for a second successive 2014 win.

Wales have set sights on a record third title in succession.

But Jenkins said of Ireland: "They are one of the big challengers to us for the championship and that is where you raise your game."

The Cardiff Blues prop has returned from a knee injury and will earn his 102nd Wales cap at the Aviva Stadium.

Wales opened their defence with a 23-15 win over Italy last weekend in Cardiff, while Ireland beat Scotland 28-6 in the first round.

Jenkins expects Wales' European successes of the past two seasons to be a factor in Ireland's motivation.

"There is pressure on us," Jenkins. "Everyone knows that teams are coming for us.

"Teams are going to be looking to knock us off our perch.

"Ireland are going to be fired up and we have got to match that and show how good we are, really.

"It comes with our success over the last two years. Going into the decider last year [against England], I don't think too many expected us to win the way we did [Wales won 30-3].

"That is the pressure we put on ourselves to win the title, so I suppose the same is the case this year.

"We have put the pressure on ourselves.

"It's different to the first five or so years when I was first involved [with Wales].

"You always felt you had a chance going into a game, but [now] you've got belief. It's a big change in mentality."

An Ireland win would set up a Triple Crown chance for them at Twickenham in the third round on Saturday, 22 February, in star centre Brian O'Driscoll's final season at Test level.

And Jenkins says the narrow nature of contests between the teams in recent seasons highlights how intense an encounter Saturday's could be.

"It has always been pretty tight between us," he added.

"Virtually every game, there seems to be just one score in it.

"Under their new coach [Joe Schmidt], and just from their performances in the autumn Tests, we know they are going to be just as good."

Jenkins also paid a tribute to O'Driscoll, saying: "I've been on three [Lions] tours with him and got on really well with him.

"He cut us to shreds last season and he knows the game inside out and is a great player.

"I have enjoyed playing against him, but hopefully we can keep him quiet this weekend and he doesn't cause too much trouble."