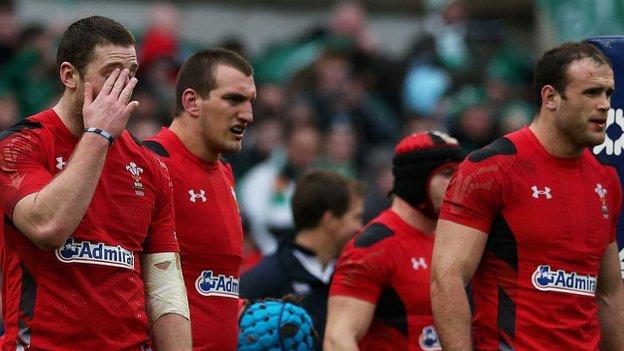 But the flanker is confident Wales can bounce back to win the title for a record third time.

The hosts dominated Wales to post a second successive tournament win over Wales and Warburton said: "Credit's due to Ireland. They stopped us."

He added: "We won the Championship last year with four wins and that's still achievable this year. "

Ireland were 13-0 up at the break thanks to Chris Henry's try and Jonny Sexton's boot.

"Wales were totally out-muscled. Plan A didn't work and unfortunately they didn't have another game plan. There was total domination of ball play by Ireland. It was difficult to stop."

A Leigh Halfpenny penalty was all Wales could muster in response as Ireland's superiority continued.

Warburton told BBC Radio Wales his side were "well beaten".

He added: "They [Ireland] played very well, they won the territory battle and they did very well at the breakdown - they were deserved winners.

"First half we couldn't keep any ball.

"We didn't get our power runners into the game and the game plan we wanted to execute we didn't and that's just because we weren't clinical enough.

"But credit's due to Ireland. They stopped us - I think they knew where we were coming.

"They competed very hard and made it very difficult for us to get going.

"The boys were fired up. You can't not be in a game like this in a stadium such as the Aviva against Ireland.

"It was a fantastic match to be involved in, but Ireland were just much better on the day.

"It's been a long time since I lost by 23 points so we're just going to have to re-group and go back in next week and work pretty hard on the French game [on Friday, 21 February] in Cardiff."

Asked if he felt Wales could take any positives into the clash against France from the game in Dublin, Warburton replied: "I'll have to come back to you on that one."