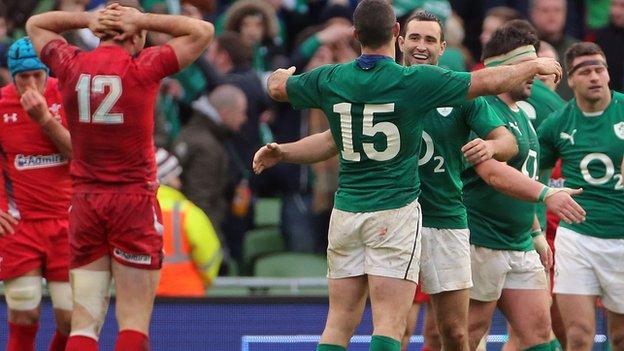 Joe Schmidt admitted Irish fans will be expecting even more from their team after Saturday's emphatic 26-3 Six Nations win over Wales in Dublin.

After an opening win over Scotland, the latest victory means Ireland have made their best start to the championship since their Grand Slam year in 2009.

"We needed that performance and that result," said Schmidt.

"But there will be a lot of pressure to meet the expectations which will probably be greater now."

"Tactically Ireland head coach Joe Schmidt said let's kick the ball away, take all the steam out of this Wales physicality. The big Welsh backs were running all the time but never getting the space they've been used to having."

Tries from Ulster pair Chris Henry and Paddy Jackson, allied to 14 points from the boot of impressive fly-half Jonathan Sexton, put Schmidt's men in a strong position heading into a Twickenham meeting with England in two weeks' time.

"We will keep working away and try to control what we can control," added the Ireland coach.

"We will watch England's match against Scotland and plan for what we can do at Twickenham.

"It was great to get some scoreboard pressure on the Welsh guys, and when the rain came it was hard for them to get back into the game because conditions were greasy."

Ireland captain Paul O'Connell was delighted to see his side make it two wins out of two but warned of tougher obstacles to come.

"We have got a new set-up under Joe and we have been relatively injury-free. Two home games to start as well has been very important.

"We knew it was going to be really tough but we would have been disappointed if we weren't two wins out of two at home, so it gets a lot harder from here on."

The Munster lock added: "I think we did very well in the first half, our discipline was excellent and Johnny Sexton's kicking was excellent.

"I suppose that kept a lot of pressure on Wales and particularly with Johnny's kicking game, with the conditions, if you get a small bit of a lead the other team has to play and it becomes very tough.

"I am surprised by the magnitude of the scoreline but it is a great result for us."