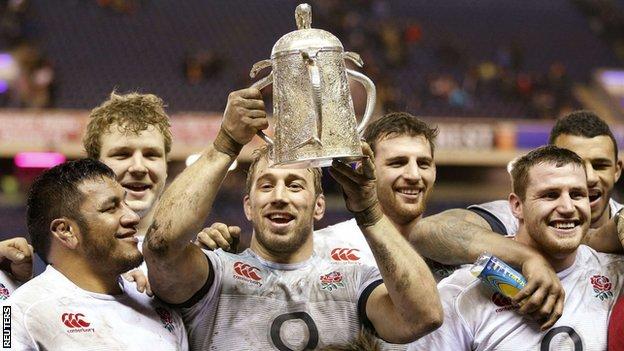 England captain Chris Robshaw says the team must be more ruthless if they are to have a realistic chance of winning the 2014 Six Nations Championship.

Tries from Luther Burrell and Mike Brown helped Stuart Lancaster's side beat Scotland 20-0 ahead of unbeaten Ireland's visit on 22 February.

"We weren't too happy with our attack, I felt we left some points out there," Robshaw told BBC Sport.

Seven points from Owen Farrell and a Danny Care drop-goal allowed England to dominate their opponents at Murrayfield and retain the Calcutta Cup.

Head coach Lancaster admitted there was "a bit of frustration" they did not win by a bigger margin, despite bouncing back from their opening defeat by France in Paris.

"There were chances there that we didn't take and we definitely have regrets over the points we left out there," Lancaster said. "We played some really good stuff in difficult conditions. Scotland had to defend desperately."

Lancaster is already relishing the test against Ireland, who produced an impressive 26-3 win over defending champions Wales.

"We're definitely out to win the tournament, even after the loss to France," he added.

"Huge credit to Ireland on a great win. They'll be coming to Twickenham full of confidence. It's a very important game and it'll be tough, but we're confident."

Lancaster was pleased with the emerging centre partnership of Billy Twelvetrees and Burrell, who scored for the second week in a row.

"The work that [assistant coaches] Andy Farrell and Mike Catt have done with Luther and Billy is really paying off," he added.

"The timing and number of options going into the line were excellent and Luther's try was a good case in point.

"They're going well as a partnership, especially given that they've only trained together for two weeks and have played twice.

"They'll need to be on top of their game against the Irish centres, who are clearly world class."