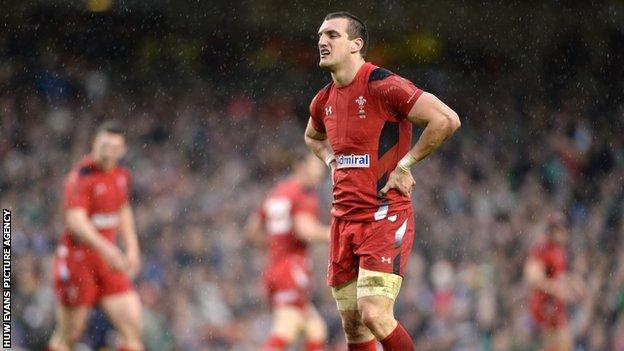 Wales should pick players based on form rather than reputation, says ex-Wales star Jonathan Davies following the 26-3 Six Nations defeat by Ireland.

Several Welshman who played in Dublin, including captain Sam Warburton, have recently returned from injury.

I don't think Wales have been under this much pressure for a long, long, time

"His last game was in November against the Australians. I don't think you can do that," said Davies.

"You have to play yourself back into form, especially at international level."

And the New Zealander has already hinted he will make changes, especially in the pack, saying: "We were well beaten up front, weren't we?"

Next up for Wales are France, who have won both their matches so far, against England and Italy.

"Wales are a talented bunch of players and they know they have to respond against France," he said.

Davies says Wales are capable of beating France but thinks some changes could be beneficial.

"I think we need more zip, pace, between the backs and forwards," he said.

"Those are the changes now we might have to make - if Ireland have worked us out then probably France have as well.

"I don't think Wales have been under this much pressure for a long, long, time.

"They've been very successful and they don't become a bad side overnight, but if a lot of the players don't play well you can't expect results at international level."