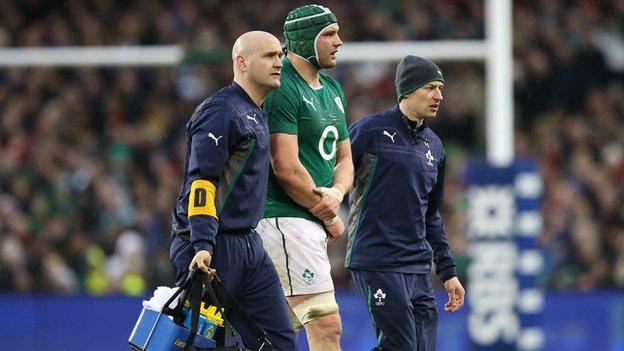 Second row Dan Tuohy will miss the remainder of Ireland's Six Nations campaign and is also a doubt for Ulster's Heineken Cup quarter-final against Saracens in Belfast on 5 April.

Tuohy suffered a fractured forearm after coming on as a replacement during Ireland's convincing 26-3 win over Wales at the Aviva Stadium on Saturday.

He is expected to be ruled out of action for six to eight weeks.

His injury will be assessed on Monday ahead of the Pro12 game with the Scarlets at Ravenhill on Friday night.

With Tuohy sidelined, Iain Henderson is likely to move up the pecking order with Ireland for the crucial clash with England at Twickenham on Saturday 22 February.

In that instance, Johann Muller and Neil McComb would be left as Ulster's remaining second row options, although Robbie Diack has also played at lock this season.

Meanwhile winger Tommy Bowe could play some part in Friday night's match, having not played since suffering a groin injury in Ireland's last-gasp defeat by the All Blacks on 24 November.

If he came through that test successfully, Ireland coach Joe Schmidt has indicated that he would come under consideration for the Ireland-England encounter.

An IRFU statement released on Monday indicated that a number of other Irish players had received "bumps and bruises" on Saturday but their availability for the big match at Twickenham was not in doubt.

Along with Henderson, Donnacha Ryan and Mike McCarthy are possible options to replace Tuohy on the replacements' bench against England while Bowe, Luke Fitzgerald, Simon Zebo and Fergus McFadden could challenge Andrew Trimble and Dave Kearney for the wing positions.