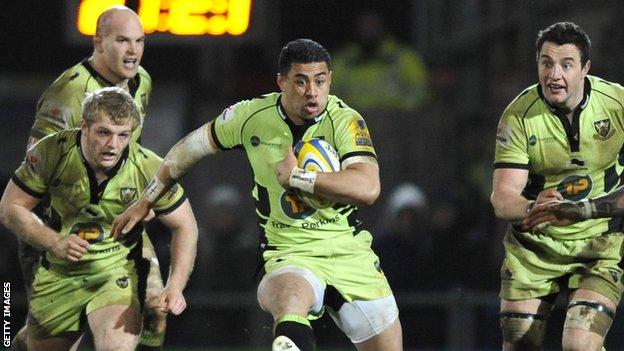 Northampton Saints boss Jim Mallinder has praised their "outstanding" efforts in the win at Exeter, which took them to the top of the Premiership table.

"We're in a good place at the moment," Mallinder told BBC Radio Northampton. "Internationals doing well for England and Wales, and then the lads at home.

"To score with a couple of minutes was remaining was outstanding."

He added: "We could've easily [then] conceded but we trusted our defence and that was just as good as the score before it."

Quintet Dylan Hartley, Courtney Lawes, Tom Wood, Lee Dickson and Luther Burrell are all with England at the Six Nations, while George North is with Wales.

And Mallinder reserved special praise for Burrell, after the 26-year-old scored a try on his debut in the defeat by France on the opening weekend, and then touched down again on Saturday as England beat Scotland.

"I'm delighted for Luther," Mallinder said. "He's been magnificent for us and for him to score in consecutive games, he'll be chuffed to bits."