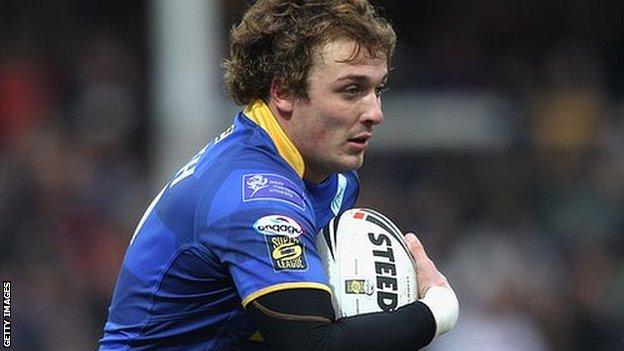 Newcastle Falcons have signed former Leeds Rhinos and Wakefield Trinity Wildcats winger Lee Smith until the end of the 2014-15 season.

The 27-year-old averaged a try every other game in over 150 appearances for Leeds before moving to Wakefield.

Newcastle director of rugby Dean Richards said he was confident Smith would be a success in the 15-man code.

The Falcons have also confirmed second-row Carlo del Fava has been forced to retire due to a neck injury.

Smith has switched codes once before, leaving Leeds to join London Wasps in 2009.

He came up against the Falcons in the LV= Cup in his first game at Adams Park, but quickly returned to Leeds for family reasons.

I would like to thank everyone who has been a part of my rugby career.

He won the Super League Grand Final three times in a row with Leeds - including a man-of-the-match display against St Helens in 2008 - and scored seven tries in eight appearances for England.

"I'm extremely thankful to Newcastle for giving me the opportunity to play in the Aviva Premiership," said Smith.

Del Fava, who was capped 54 times by Italy, has decided to retire after being advised by doctors that, to continue to play, he would need to undergo two major operations without any certainty of success.

The 32-year-old joined the Falcons in the summer of 2012 and helped the club make an immediate return to the Aviva Premiership.

"I would like to thank everyone who has been a part of my rugby career and I'm now looking forward to the challenges post rugby," said del Fava.

"I'm very disappointed not to be involved with the club's Aviva Premiership campaign for the remainder of the season, and I would like to wish the team all the very best."