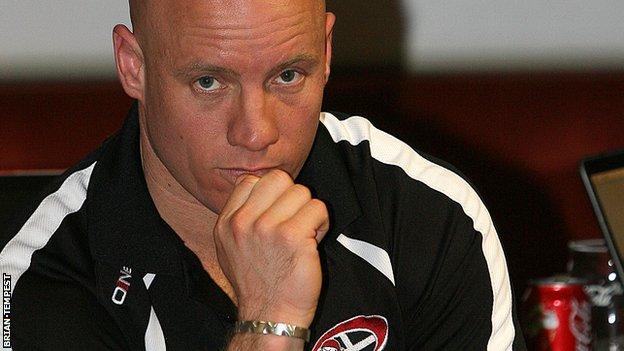 Jersey boss Harvey Biljon said he is proud of his side's efforts after they recorded their first victory of his reign with a 17-13 win over Nottingham.

The win eases some of the pressure on Jersey at the wrong end of the Championship table, with a six-point gap to bottom-of-the-table Ealing.

"I'm really proud of the guys they were warriors," he told BBC Radio Jersey.

"They delivered on what we spoke about all week, combining a backs and forwards performance."

The battle to avoid relegation looks to be boiling down to a straight fight between Ealing and Jersey, although the islanders' victory - just their fourth of a difficult season - has dragged Nottingham further into the equation.

"It builds confidence and it makes training a happy place next week," added Biljon.

"We can come in knowing we still need to work hard but it makes it a happy environment.

"The guys can feel good about the fact that what they're doing in training during the week is paying off at the weekends.

"They worked really hard for each other and the result took care of itself."

The victory came courtesy of a last-gasp try from youngster Jack Burroughs and the full-back - who credited replacement Dai Bishop with setting him up for the crucial score - said the victory could provide a springboard for the rest of the season.

"We were looking to get a win to kick-start the last part of the season and we got that through a lot of passion, but also a lot of patience and intelligence," he said.

"It was certainly one of the most satisfying moments of my career to get that try - to get the winner and hear the crowd erupt like that was just unbelievable."