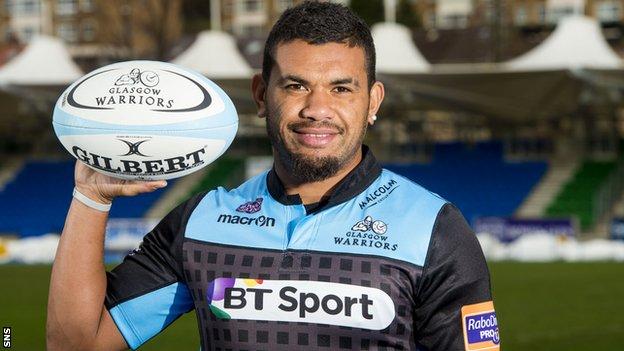 Glasgow Warriors have signed United States centre Folau Niua until the end of the season.

The 29-year-old will join Gregor Townsend's squad this week, subject to a visa and medical,

"I enjoyed playing at Scotstoun with the USA sevens team at the Glasgow Sevens last year," he said.

"It'll be the first time I've played for a club in Europe, but if things go well I'd love to stay in Glasgow beyond this season."

The California-born player, who has scored 239 points in 21 sevens tournaments, has earned three caps for his country.

"I've played against Leone Nakarawa and Niko Matawalu on the sevens circuit and they're very good players and I enjoyed playing at Scotstoun with the USA sevens team at the Glasgow Sevens last year," Niua added.

"I've been playing a lot of sevens recently, so I'm fit and ready to play games."

Townsend said he was delighted with the club's latest addition.

"Folau is an exciting player who has a lot of experience, having been a regular for the USA sevens team for the past few years and now with three caps for his full national team," he said.

"He had a cracking game against the New Zealand Maori team at the end of last year and is a real ball-playing centre who is also a very effective ball carrier."