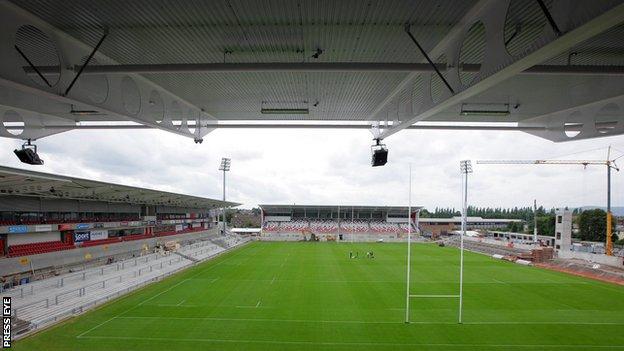 The redeveloped Ravenhill will be officially opened on Friday 2 May when Ulster face Leinster in the Pro12.

The venue will be at its new full 18,000 capacity for the Heineken Cup quarter-final against Saracens on 5 April but the officially tape-cutting will take place four weeks later.

Three new stands, funded by government funding of almost £16 million, have been built at the ground.

Ulster rugby will be celebrated in a ceremony before the kick-off on 2 May.

The very first game played at Ravenhill was a clash between Ulster and Leinster on 12 January 1924.

Work on the new Nevin Spence Centre, an education and heritage centre, a new community 3G pitch facility and other improvements will start at the venue in the summer.

"We have some exciting plans for the opening and I have no doubt that it will truly be a once in a lifetime event for any Ulster Rugby fan," added the Ulster chief executive.