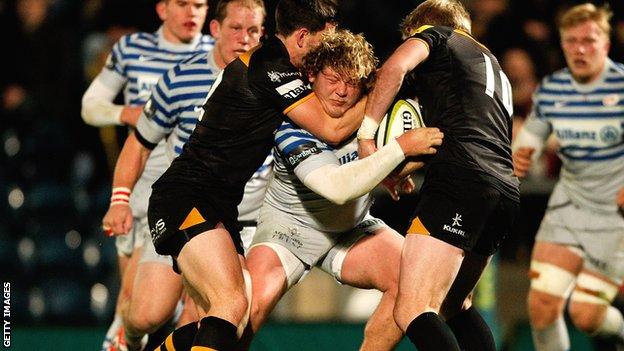 Plymouth Albion have added to their options in the front row by signing Saracens hooker Jared Saunders on loan until the end of the season.

The 23-year-old, who can be recalled by Sarries at any time, converted from his original position of prop last season.

South Africa-born Saunders has made 18 first-team appearances for Saracens since joining them in 2010.

"He is a physical and dynamic player and has Premiership experience," said Albion head coach James Shanahan.

"I have known Jared from my time at Old Albanian and also with Hertfordshire. Due to injury we were down to one hooker last weekend and it was vital that we added to our squad."

Albion have suffered badly with injuries and unavailability at hooker this season, with Tom Cowan-Dickie fracturing his ankle and his brother Luke being recalled by parent club Exeter Chiefs.

Gareth Evans suffered a back spasm before last week's game against London Scottish, leaving them with just Davy McGregor as their only fit specialist hooker.

Saunders is expected to go straight into Albion's squad for this weekend's game against Jersey at Brickfield.