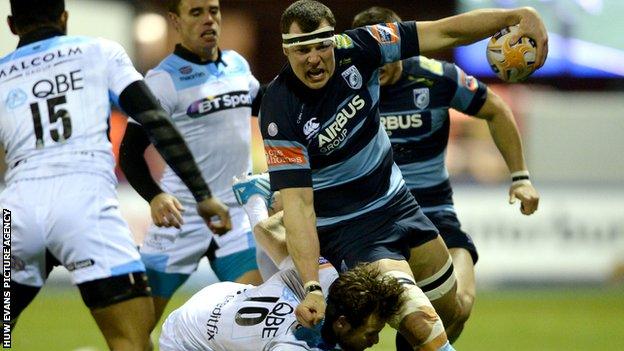 Mark Bennett scored a late try as Glasgow came back to beat Blues and claim their seventh successive Pro12 away win.

The Blues, featuring Gethin Jenkins and Sam Warburton, led 10-7 at the interval through Robin Copeland's try with Lee Jones replying.

But Bennett touched down for Glasgow's winning try with three minutes left.

Wales stars Warburton and Jenkins started for the Blues having been released for regional duty by national team head coach Warren Gatland.

The Blues made a positive start although a promising move came to nothing when fly-half Simon Humberstone was unable to catch his own chip before it went dead.

However Humberstone kicked the first points of the game with a seventh minute penalty after Glasgow infringed at both scrum and lineout.

Opposite number Ruaridh Jackson missed an opportunity to level the scores when he dragged a long range penalty kick wide of the post.

Centre Bennett took over the kicking duties when Glasgow were awarded a penalty but the centre saw his effort strike the post.

The Blues capitalised on a Jackson error when the fly-half fumbled a flick inside by home lock Macauley Cook, who had looked suspiciously close to the touchline.

Humberstone grabbed the loose ball and sent number eight Robin Copeland racing in for his third try of the season, somewhat against the run of play and the try was successfully converted by Humberstone, giviing the Blues a 10-0 lead.

But with a minute of the first half remaining Glasgow reduced the home side's advantage through a try of their own.

Lee Jones, on loan from Edinburgh, shrugged off several challenges before crossing the line for a try and Jackson added the extras with the last kick of the half.

The Blues scored their second try early in the second period when full-back Dan Fish twice retrieved his own kick ahead, hooker Kristian Dacey drove deep into the visitors' 22.

When the ball squirted loose, scrum-half Jones who had replaced the injured Lloyd Williams during the first half, dribbled over the line and fell on it.

Glasgow replacement Finn Russell cut the deficit with two simple penalties, but Gareth Davies, who had come on for Humberstone, responded with one of his own.

The Warriors were piling on the pressure and they were rewarded when substitute flanker James Eddie ploughed deep into Blues territory and was then on hand to crash over following an attacking scrum five.

Russell's conversion brought the scores level with 10 minutes left and the visitors grabbed their victory when Bennett took a lobbed pass to trot over wide on the right, Russell rubbing it in with a conversion from the touchline.