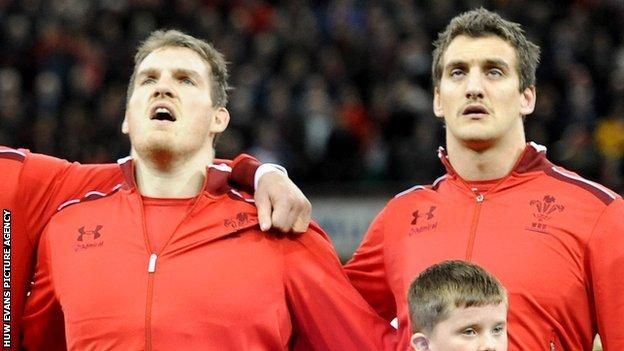 The decision comes in the wake of Wales' 26-3 Six Nations defeat by Ireland in Dublin on Saturday.

Blues host Glasgow Warriors at the Arms Park on Saturday while Wales' next game is against France in Cardiff six days later.

"There were four of that forward pack [against Ireland] hadn't had a lot of rugby," said Wales coach Warren Gatland.

"We have spoken to players and they have admitted that there display and performances were below par and unlike them,

"We have been pleased with the response of the players."

Wales have also called in Ospreys centre Ashley Beck and number eight Dan Baker to training as they prepare to face France at Millennium Stadium on Friday, 21 February.

However, the duo are also available to their region, who host Treviso in Swansea on Sunday.

Former Wales skipper Ryan Jones, who was ruled out of the Six Nations squad with a hamstring injury, is expected to be on the bench for the Ospreys.