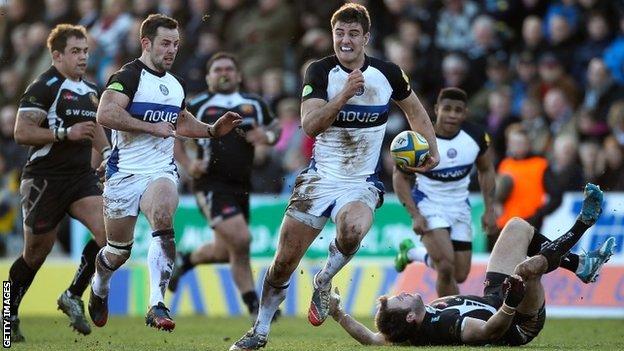 Bath underlined their credentials as a Premiership force as they edged out Exeter in a riveting encounter.

Ollie Devoto's superb try gave Bath the lead after a tight opening but Exeter's Ben White burrowed over just before half-time to put his side 13-10 up.

The Chiefs opened up a six-point lead but in-form Bath hit back with Kyle Eastmond and Nick Abendanon tries.

The Chiefs - who are still looking for a first win over Bath since 1978 - can be proud of their display, but were left rueing yet another narrow loss which leaves them eighth in the table and with serious work to do to make the European places.

Since beating Sale 18-16 on 1 November 2013, Exeter Chiefs have made a nasty habit of being on the wrong side of close scorelines, losing seven games by seven points or fewer

Exeter took an expansive approach early on, testing the Bath drift defence, and the continuity paid dividends as Steenson knocked over a penalty to open the scoring.

But the lead did not last long as flanker Tom Johnson got isolated as he ran the ball back after the restart to give the impressive Ford the chance to level the scores.

An increasingly under-pressure Exeter finally buckled when a brilliant piece of skill from Ford put Devoto through the defensive line, and the centre took full advantage with a devastating angled run which took him past two would-be tacklers and over the try-line from 45 metres out.

The belligerent Chiefs are not a side to be easily knocked out of their stride though. Steenson's second penalty made it 10-6 and they ended the first half on top, kicking to the corner before embarking on a succession of drives and darts to the line which ended with White bursting over from a yard out.

An early penalty at the scrum gave Steenson the chance to put Exeter 16-10 up but the visitors showed why they went into the game on a run of just one defeat in their last 18 games as they stormed back into the lead.

A brilliant, intuitive handling move down the touchline - involving Eastmond, Devoto and Watson - gained Bath 40 metres and, from the resulting field position, they regained the lead with Eastmond cutting inside Dean Mumm at first receiver to race over unopposed from 20 metres out.

Ford's conversion put Bath one point ahead and a magnificent piece of finishing from replacement Abendanon - after some fine work from his team-mates to release him down the left - saw the visitors extend the lead soon after.

But a powerful spell from Exeter saw them tear down the pitch, with lock Damien Welch making great ground with ball in hand. Some fantastic hands in midfield put Whitten in space and he dummied the Bath defence to cross the line.

Exeter, roared on by a passionate Sandy Park crowd, cranked up the pressure with some muscular drives into the Bath 22 but when Dom Armand lost possession in the shadow of the posts, the visitors made sure they kept their opponents at arm's length.

Aided by a missed Ford touch, which Abendanon turned into a penalty after a superb chase, Bath marched up the field and eventually won a penalty - which the impressive Ford slotted to ensure Exeter's wait for a win over their West Country rivals continues.

"He said that he needed to recover well from this game and train well on Monday. That's his focus, that's all he thinks about - the next day.

"But it is not just about George because Kyle Eastmond is coming more into the game.

"The conditions didn't suit him that well but when he goes for the line he is just as good as George. And the way that Ollie Devoto has progressed over the past 10 months has been outstanding.

"The Exeter coaches have done a fantastic job over the past few years and, as a former defence coach, they ask more questions than any team in the country. If you don't defend here, then they are going to catch you out."

"We actually did some things that we haven't practised, let alone talked about and they seemed to creep in to our game a little too often. I've told the guys that they have to take responsibility for that.

"You have to responsibility for the little things because they are just hurting us - the opposition are hurting us with big pieces of pressure.

"Someone has to stand there and taking responsibility and giving that little bit of organisation."