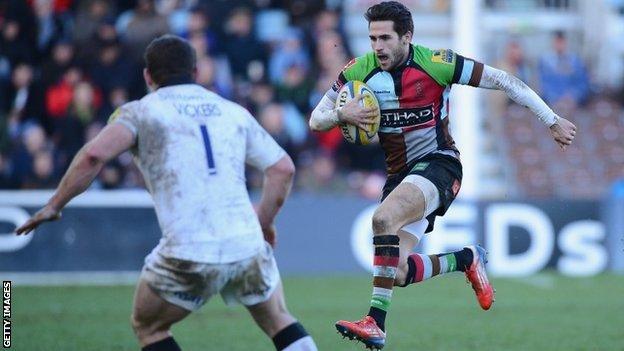 Harlequins came from behind in the closing minutes to strengthen their grip on a place in the play-offs with a narrow win over Newcastle.

The Falcons were 12-3 down at half-time after tries from Ollie Lindsay-Hague and Sam Smith put Quins in control.

Newcastle stormed back into the game after the break as two Rory Clegg penalties and Alex Tait's try edged their side into a 14-12 lead.

But Quins held their nerve and two late Ben Botica kicks gave his side the win.

Falcons director of rugby Dean Richards was making his first competitive return to the Twickenham Stoop since the infamous Bloodgate incident, and although his side left west London without a win the former England number eight will have been encouraged by their display.

Newcastle dominated the scrum but ultimately paid the price for several missed kicks at goal, while two yellow cards - for Will Welch and Scott Lawson - did not help their cause.

Botica missed a straightforward penalty attempt early on and, perhaps with this in mind, Quins opted to kick for the corner with three points on offer soon after.

The home side were rewarded when Jordan Turner-Hall and Ugo Monye created the dents in Newcastle's defence which allowed Lindsay-Hague to cruise through a sizable gap and score.

Despite a swirling wind, Falcons gradually fought their way back into the game with centre Jamie Helleur twice breaching the defensive line but their momentum was stopped when captain Welch was sin-binned for dragging down a maul.

Smith barged over from close range to put Quins well on top but Clegg opened his side's account with a penalty before hitting the post with another attempt before half-time.

Clegg, with the wind at his back, found his range after the break, kicking two penalties to cut the gap to 12-9 but crucially hit the post with another effort after his pack had shunted Quins back at the scrum.

Botica caught his own up-and-under before sending number eight Nick Easter into the space, but the former England man was caught by the cover defence.

Newcastle went ahead with 10 minutes to go as impressive handling gave Noah Cato the chance to zoom down the right wing. Lawson kept the move going and Tait just managed to get over the line.

Clegg missed the conversion and it proved costly as, with five minutes to go, Lawson was penalised and yellow-carded, with Botica kicking the resulting penalty and then another with the last kick of the match to secure victory.

"We didn't have one position in the second half - we have to be better than that as there were plenty of inaccuracies and we gave away numerous silly penalties.

"We showed massive mental strength and were fighting to the end but if Rory Clegg had kicked his goals we would have lost.

"Newcastle will be frustrated and disappointed."

"Every point is well received but we should have four today, not one. The boys were outstanding and wore their heart on their sleeves.

"We had a strong base up front - there was a howling gale blowing down the middle and for once we actually used our wind advantage.

"Full credit to the Quins, they never say die and at the end our defence of their drives was crucial as we ended up competing instead of defending."