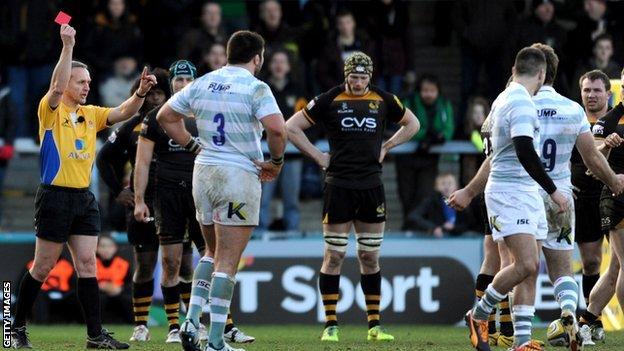 London Irish battled to a narrow win at London Wasps, despite having Tomas O'Leary sent off for a stamp.

Ian Humphreys and David Paice both touched down to put the Exiles ahead, before James Short went over to leave Wasps trailing 17-8 at the break.

O'Leary was dismissed early in the second half and Joe Carlisle took his penalty count to five to drag the home side back into it and level the score.

It completed a second successive eye-catching away win, after Brian Smith's side produced one of the surprises of the season to win at Saracens last week.

But the match is likely to be remembered for O'Leary's stamp, which Wasps director of rugby Dai Young described as "reckless rather than vicious".

The visitors took an early lead when Elliot Daly's attempted clearance was charged down by Nic Rouse, and Humphreys picked up and drove over from only a few yards out.

James O'Connor and Carlisle then exchanged penalties, before the Exiles extended their advantage when Ofisa Treviranus picked up and drove towards the corner, and just a couple of phases later Paice picked up and forced his way through.

With O'Connor again successfully converting, London Irish took their advantage up to 14 points.

But Short latched onto Andrea Masi's kick through to register Wasps' first try of the match, before Masi should then have scored himself but dropped a simple pass with the try-line at his mercy.

The home side continued to press at the start of the second half and, after Carlisle had slotted another penalty after an offence at the line-out, O'Leary had his moment of madness, putting his foot down heavily on James Haskell's head and leaving Irish to play the remaining 32 minutes a man light.

Carlisle kicked three more penalties, while O'Connor responded with one his own, as Wasps eroded the visitors' lead to leave the match all-square heading into the final 10 minutes.

But Geraghty's 20-metre drop goal won the match near the end to move the Exiles up to ninth in the table and leave play-off-chasing Wasps in seventh.