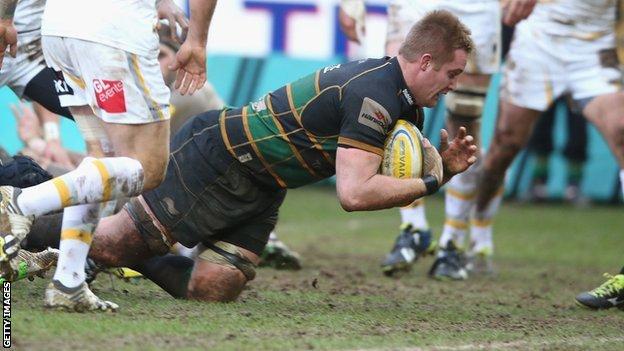 Northampton beat Worcester to return to the summit of the Premiership table.

After a scrappy opening period Saints had to settle for a slender 9-6 half-time lead, with Stephen Myler and Chris Pennell kicking all the points.

Northampton's advantage was extended by a penalty try after the break, before David Lemi touched down for Worcester.

But Warriors had captain Jonathan Thomas sent off for throwing a punch, and two tries by Sixways-bound Gerrit-Jan van Velze sealed victory.

If Worcester fail to win either of their next two fixtures, at home to Sale and away to Harlequins, they will have gone a whole calendar year without winning in the Premiership.

The current run of 19 straight league defeats is a club record.

Northampton, who were never at their fluent best against Worcester, have now won nine Premiership matches in a row and once again leapfrog Saracens - Mark McCall's side having won at Sale on Friday.

Warriors, meanwhile, remain marooned at the bottom of the table having lost every one of their 14 league matches this season.

It was Worcester who actually started the brighter, enjoying the majority of possession in the early stages and leading through Pennell's penalty following an infringement at the scrum.

But the visiting full-back then failed with a second, more difficult kicking opportunity soon after, and was instantly made to regret that miss when Myler slotted a penalty of his own after Northampton's first meaningful attack was halted illegally.

Saints continued to grow into the match and a further Myler penalty after an infringement at the breakdown put them ahead for the first time - and the 29-year-old completed a hat-trick of penalties inside the opening half an hour after the hosts this time won the battle at scrum time.

Worcester then had Leonardo Senatore sent to the sin bin for preventing scrum-half Lee Dickson, back with Northampton after a spell on England duty, from taking a quick tap and go.

But the Warriors defence held strong, twice forcing crucial turnovers with Saints homing in on their try-line, and Pennell kicked a penalty following the final play of the first half to go in only three points down at the break.

Northampton made the strong start to the second half and, after Worcester twice brought down rolling mauls illegally, were awarded a penalty try by referee Wayne Barnes. Myler easily converted from in front of the posts.

But Worcester's response was instant, with Lemi latching onto Alex Grove's poke through to reduce the arrears almost straight from the restart. Pennell missed the conversion.

However, having immediately clawed their way back into the game, Warriors then had Welshman Thomas sent off for throwing a punch towards Saints forward Sam Dickinson, who himself saw yellow for his part in the incident.

Sam Betty was the next to be given his marching orders, sin-binned for bringing down another Northampton maul, and Van Velze, at the heart of the home side's pack, was able to force his way over soon after to extend their lead to 10 points. Myler added a further two points from the conversion.

Pennell then kicked a penalty after Saints were caught offside, but Van Velze - who has agreed a move to Worcester for next season - scored his second try of the match following a good attacking move by Northampton.

It was once again converted by Myler, to confirm the hosts' superiority.

"We're top of the league, which is a pretty good place to be to be honest.

"It's [difficult] in international weeks when we've got a number of our best players missing and a number of them still injured as well.

"It's slightly frustrating that we couldn't get the bonus point in the last few minutes, but very pleasing we're still in winning ways.

"They picked a big, heavy pack and stopped us mauling, legally or not, but they stopped us."

"We didn't get anything out of it, but we did as a group in terms of showing we were prepared to fight. We move on to next week.

"We've got a challenge here this season with this group. I know what next season looks like, but I'm interested in the people here at the moment and they did a good job today.

"We didn't get anything out of it this week, but we've got a home game next week and if we keep turning in emotional performances like this one and the one last week we're going to cause someone a problem soon."