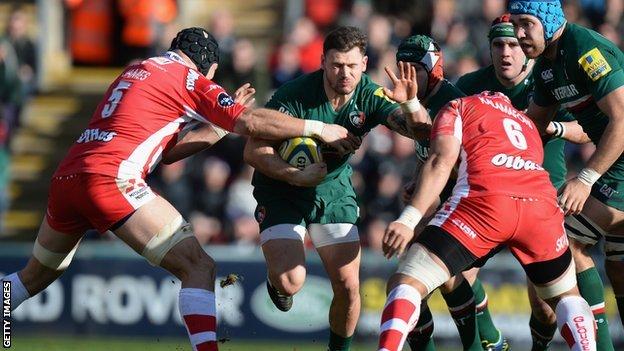 Leicester came from behind to beat a spirited Gloucester at Welford Road.

The Cherry and Whites more than matched the reigning champions in the opening period, with Robert Cook's penalty cancelling out Toby Flood's earlier effort to leave the scores tied at 3-3.

Martyn Thomas superbly set up Charlie Sharples to put Gloucester ahead 10 minutes into the second half.

But Matthew Tait's try brought the scores level, and Flood's late penalty won it for Tigers.

It was another narrow escape for Richard Cockerill's team, who only scraped past winless Worcester by the finest of margins at Sixways last week, and never looked close to top gear against a Gloucester side with just four league wins to their name all season.

Despite their lowly position of 10th in the table, the Cherry and Whites started the brighter of the two, twice creating try-scoring opportunities in the opening 10 minutes only for the ball to be knocked forward with the whitewash in sight.

Flood, meanwhile, sent his 30-metre penalty wide after the visitors were penalised on the floor.

But though Gloucester continued to pass the ball with the greater conviction, Leicester's pack were dominating at scrum time - and the pressure eventually told on the half-hour mark when referee Dean Richards awarded them a penalty within range, which Flood this time converted.

The visitors' response was quick, however, as sloppy Tigers play in possession twice presented Cook with kicking opportunities of his own, the second of which he duly took to leave the scores level at the break.

The second half started in much the same vein as the first, with both sides enjoying spells with the ball in hand but frequently seeing moves break down without really threatening.

It was Gloucester who registered the first try as the match headed into the final 30 minutes - a brilliant move finished by Sharples, but one that originated from another Leicester mistake.

A poorly executed line-out in their defensive zone handed possession back to Gloucester, who smartly moved the ball from left to right, and Thomas produced a sensational backward pass on the touchline to allow winger Sharples to stroll over. Cook missed with the conversion.

With the Welford Road crowd becoming increasingly displeased with their side's display, Tigers finally broke through with 12 minutes remaining.

Following a successful line-out on the right, the ball was moved swiftly to the left and then back right again, allowing Flood to tee up full-back Tait for the try.

But Flood fluffed the angled, but achievable conversion - letting out a loud cry of frustration as he did - to leave the score finely poised at 8-8 heading into the closing stages.

The miss was not to prove decisive, however, as Flood's late penalty following a further infringement at the scrum won the match in the final moments to continue fifth-placed Leicester's hot pursuit of the Premiership's play-off spots.

"We played poorly. We were hanging on for dear life at the end and we need to get better.

"We were glad to get the win, that's the only positive about the game."

"We did well, but you have to take into context who we were playing against. We would expect to get some dominance there against Gloucester.

"But we were inaccurate across the board. We had opportunities, but we coughed the ball up numerous times with basic errors.

"We need to get some rhythm back in our game. If we play as poorly next week we will get beaten."

"I was very complimentary to the players because of the way they committed to the game. The work in the contact area was exceptional.

"We were under a lot of pressure in the set-piece, but we played around that and tried to play a fluid game.

"I thought we were great. What can you say when guys give everything? We have just got to use that as a benchmark."