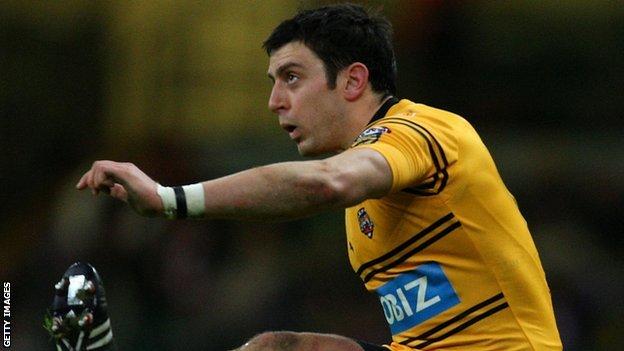 Kirk Dixon surpassed the 1,000-point mark for Castleford as the Tigers came from behind to beat Bradford.

Cash-strapped Bulls led three times and were ahead until 25 minutes before the end, thanks to tries from Danny Addy, Jamie Foster and Adrian Purtell.

But Dixon, Daryl Clark, Justin Carney, Luke Dorn and Grant Millington crossed in the second half, to add to Weller Hauraki's first-half score.

But they were without Garreth Carvell and Jarrod Sammut, who unexpectedly left for Hull FC and Wakefield prior to their season opener.

Bradford struck first when Luke Gale and Gaskell put Addy through a hole and Foster converted.

Purtell and Tigers hooker Clark both had chances to cross but the next score fell to Hauraki, who strolled through some inadequate tackling, and Dixon converted to leave the sides level at the break.

The game then saw three tries in the opening seven minutes of the second half.

Bradford went ahead as Foster touched down after Gale's grubber kick, but Cas immediately regained possession and capitalised when Dixon crossed in the corner and then converted from the touchline.

But the Bulls pounced again, when Purtell rose to claim and ground Gale's kick and Foster added his third goal.

However, the Tigers responded and drew level as Clark raced over and Dixon again converted to bring up the winger's 1,000th point since joining the Tigers in 2007.

Carney then collected Liam Finn's high kick and fell across the line, and after Elliot Kear's touchdown was chalked off for a forward pass for the hosts, Dorn crossed for Cas to put the result beyond doubt.

Millington added another try in the final play with Dixon, who signed a new contract this week, finishing with six goals to take his match tally to 16 points.

"We gave a few yardage errors. I thought there was a time when we were ready to go, but came up with those errors and they scored and that knocked us down a bit.

"We got fatigued because we gave the ball over too often on the first and second plays.

"But I'm proud because I felt that we were fully committed - you can't fault the effort and that's what you want.

"Cas can play good football, but we have to keep our concentration more. We gave it back to them too cheaply in the second half."

"Obviously everybody expected us to win, and perhaps we did ourselves at the start.

"They came at us really committed and I don't think we handled that too well. I think it took us 20 minutes to really put our foot on the ball, and as a result of that we just couldn't seem to get into the game.

"It was a disappointing start, but we gradually fought our way back into it. I thought all our big men did well and gave us some direction."

"Kirk's the ultimate professional and works harder than anyone - he's last out and he'll even come in on his days off and kicks goals.

"When you have someone who does that, they are great standard-bearers for the kind of culture we are trying to develop.