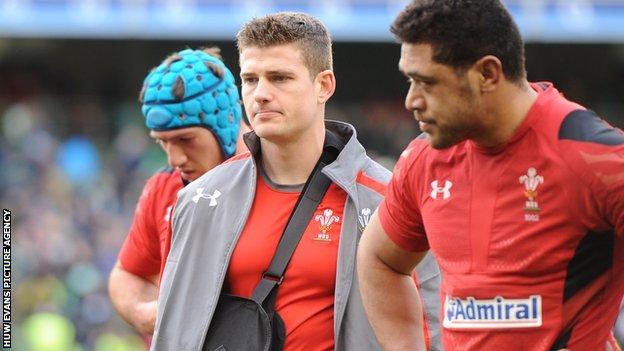 Wales centre Scott Williams has been ruled out of the rest of the Six Nations after injuring his shoulder in the 26-3 defeat by Ireland.

The 23-year-old Scarlets back will have surgery on Thursday.

Regional coach Simon Easterby said he expected the player to be out for "a good number of weeks".

Williams was replaced early in the first half against Ireland following a tackle on Brian O'Driscoll, who also received treatment.

He scored a try in Wales' 23-15 win over Italy on the opening weekend of the tournament.

And his excellent regional form was rewarded when he signed a new two-year deal with the Scarlets in the week leading up to Saturday's game in Dublin.

"We're disappointed, but these things happen. It's a shame because Scott's been very good this season," said Easterby.

"He's picked up a heavy blow against Ireland and he's going to be out for a number of weeks.

"He'll certainly miss the rest of the Six Nations and possibly even a bit longer than that."

Davies, 25, is on his way back to fitness after being injured playing for Wales against South Africa in November.

He managed 40 minutes for the Scarlets in the LV= Cup match against London Irish on 2 February and is expected to play in the Pro12 game against Ulster on Friday.

Scarlets scrum-half Rhodri Williams is also in contention to play in that game after being released from the Wales squad.

Wales have released 11 players to the regions for this weekend's Pro12 matches.

Skipper Sam Warburton and prop Gethin Jenkins are back with the Blues, who face Glasgow Warriors.