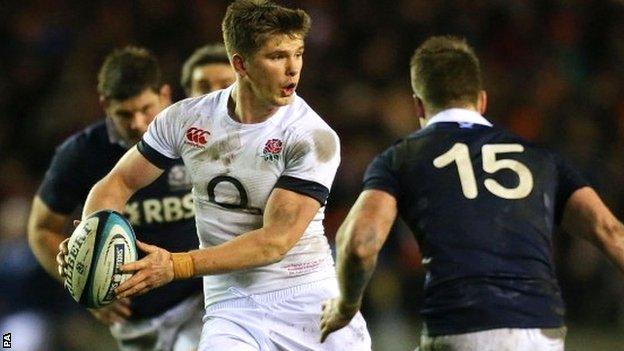 Wilkinson's drop-goal won the 2003 World Cup and he earned 91 caps before his international retirement in 2011.

"He's blossoming into a major leader in that team and when it comes to World Cups that's what you need," said Wilkinson of 22-year-old Farrell.

"He's shown a mental toughness to date that has been phenomenal."

Wilkinson, who is playing for reigning European champions Toulon at the age of 34, told BBC Sport: "When you have an attitude like that youth is a bonus - it's not about inexperience, it's about being young and full of energy, which goes with his mental toughness.

"He's doing all the right things, doing them well and getting better."

Farrell, who has been capped 21 times since making his debut two years ago, has started England's last five Tests and Wilkinson feels the Saracens player has shown more leadership qualities than he did in his England career.

"You need guys to lead others and that's a role he will play probably better than I ever did," said Wilkinson, speaking at the launch of the England Rugby 2015 volunteer programme.

Wilkinson said he is undecided about whether to retire at the end of the current season but revealed he wants to move into coaching when he does finish playing.

"I guess I'm more of a coach now than I am a player," he said. "I love it and I love seeing the difference you can make in other people's confidence and their ability to perform. I'd love to do that, definitely, and try and give back to other players.

"I'm sure rugby will always be a part of my life."