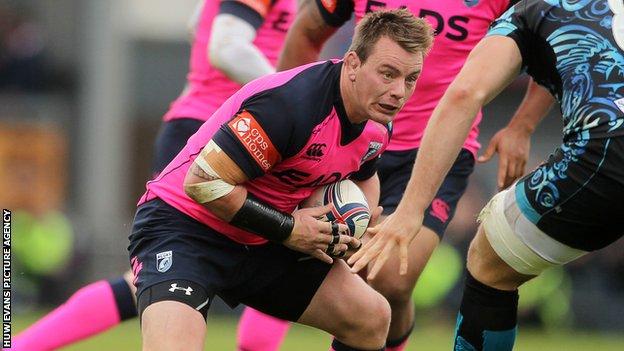 Cardiff Blues captain Matthew Rees has been given the all clear to resume full-time training.

The Wales hooker has been out of action since October while undergoing treatment for testicular cancer.

Following screening and testing, Rees has now been given the all clear by specialists and does not require further medical treatment.

"While there has always been light at the end of the tunnel this is the news I always wanted to hear," Rees said.

"Now I've been given the all clear I can concentrate on getting back to match fitness and hopefully I can play a part towards the end of this season for the Blues.

"It is a massive weight off my shoulders.

"I've been truly overwhelmed by the good luck messages I have received from the rugby world and the fantastic support I've had from my friends, family, my team-mates and staff at Cardiff Blues and the WRU throughout my treatment.

"It has meant a huge amount to me."

Rees who joined Blues from Scarlets in the summer, underwent treatment at the Velindre Cancer Centre in Cardiff.

The 33-year-old made his Wales debut in 2005 and became a British and Irish Lions Test player on the 2009 South Africa tour.

He captained Wales during the 2011 Six Nations Championship, but missed the World Cup in New Zealand later that year due to a neck injury.

"Matthew has continued to train with our strength and conditioning staff throughout his treatment, which is testament to his strength of character and ability to overcome adversity," Davies said.

"Not many people could have done that while remaining so positive and determined.

"We are all now all looking forward to seeing him back on the training field and on the field in a Cardiff Blues jersey in the future."