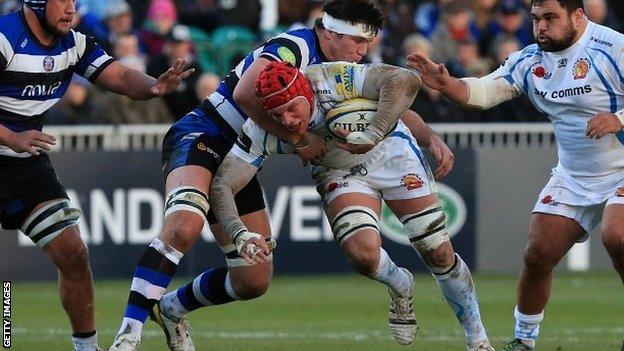 Exeter Chiefs head coach Rob Baxter says his side will use their poor record against Bath as added motivation when the sides meet on Saturday.

The Chiefs have beaten every other top-flight club since winning promotion in 2010, but have lost nine and drawn one of their 10 encounters with Bath.

"It's not something we run away from," Baxter told BBC Radio Devon.

"It's something that adds a bit extra for us because obviously we want to change that record."

Exeter's last win of any description against Bath came back in 1978, and they have already lost 21-16 in the league to their West Country rivals and 37-15 in the LV= Cup this season.

A 12-12 draw at Sandy Park in December 2012, with Bath levelling the scores courtesy of a last-minute penalty try and conversion, was as close as the Chiefs have come to a victory.

"You could say it adds a bit of pressure on Bath because its a record for them to lose," added Baxter.

"But I'm a great believer in dealing with the facts that are in front of you. If I pretend it doesn't matter when the players are fully aware we haven't beaten Bath, then it's wasting everyone's time.

"Overall the key is to not let that record have a negative effect on us and affect the way we play. We have to use our enthusiasm and desire to win a game of rugby in a positive manner."

Bath are enjoying their best season for many years, currently sitting in third place in the Premiership table with nine wins from their 13 games.

The Chiefs, who lost out to Northampton by a single point last week, are eighth in the table.