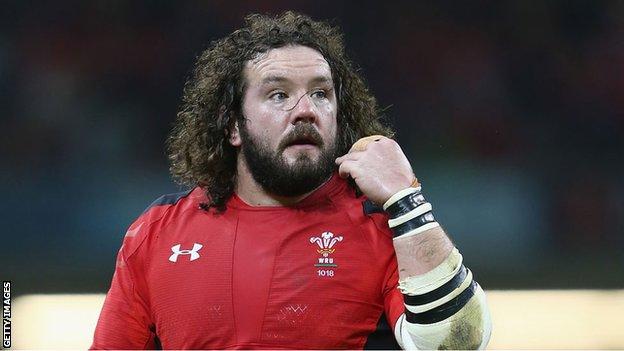 In his BBC Sport column Wales prop Adam Jones talks about the reasons for the 26-3 defeat in Ireland, pressures of propping, which French team will turn up and a visit that puts everything in its proper perspective

It's been a tough few days in camp since the game in Ireland.

We let ourselves down, we let everyone down.

The coaches have tried to be pretty good to us by trying to take a bit of the flak and saying it was kind of their doing as well.

But, we're the 15 or 23 who played the game and to totally not turn up for an international game is unacceptable. We're pretty embarrassed by it.

We didn't play to our ability at all.

There were massive issues around the driving line-out, that was a massive strong point in their game.

Ireland fly-half Jonny Sexton had an outstanding game marshalling the troops and we couldn't get a foothold.

As much as we tried to get Jamie Roberts and George North into the game we just couldn't manage to do it.

A lot of our game is based around them, and rightly so because they're two big world-class players, but we couldn't get our usual standard of ruck play.

Peter O'Mahony and Chris Henry in the back row were fantastic over the ball and we just didn't really do well enough.

We've had a lot of soul-searching since Saturday and we're just striving to put things right. We're very disappointed in ourselves really.

Short, sharp, back to basics

We're working very hard to get back to the level we can be.

The first two games have been very average, but we were poor last year against Ireland and then France was the sort of game we needed to sort of grind out a win and get a bit of momentum back, so next week hopefully it will be the same as it was against France in 2013.

Much was made of the Twitter exchange between Wales scrum-half Mike Phillips and One Direction's Niall Horan. Here's Adam Jones' perspective:

Mike's back in France this week so I haven't spoken to him about it but I think it was all light-hearted and I think he took it with a pinch of salt.

But his Twitter followers have certainly gone up over the last couple of days, so he's quite happy.

To be honest with you it's nice to have one of the members of the biggest boy bands watching your game.

The intensity has risen quite a bit. We've always hung our hat on training being short and fast - high intensity sessions - and that's what we're trying to get back to.

Sometimes it's difficult with so much rugby and so many bumps and bruises, but it's plain to see there's things we need to work on there, I don't have to list them.

I suppose the big one is that Gats said we were beaten up front - and that hurts.

There's a lot of talk about selection for the next match against France.

That's part of the game and at the end of the day you're only keeping that jersey for someone else.

It's not yours forever, so whoever gets in there and whoever is lucky enough to have it against France has got a big role now.

I've never expected to start and there's a lot of pressure coming on from every angle.

What I've always been good at is scrummaging - and it's been very well documented that this season the scrum hasn't been quite as dominant as it was.

In spite of what people are saying I've yet to give a penalty away in the Six Nations, so I don't think it's quite as bad as people seem to think.

But I'm fully aware that there's two young fellas snapping at my heels and whichever one gets picked it's a big challenge come a week Friday, but it's one of those things you thrive on.

You wouldn't be in this game if you weren't competitive and I'm certainly looking forward to the challenge.

The formula for a French onslaught

The French are going to look at us and think that the driving maul is a big weapon for them and they'll attack us there, so we'll have to work quite hard.

We know how hard it's going to be. They'll come with the usual flair but they've always got that grunt - they tend to have the full package. Whether they turn up on the day or not is another question.

It's very difficult to defend the rolling maul when it's done well.

It's a very collective thing and if you're not all singing from the same hymn sheet it can be very hard to defend.

There's many ways to skin a cat, and we haven't quite got the formula just yet.

But we're working on different things and we know how hard it's going to be to defend.

Sometimes it's as simple as chuck your head in, put your backside up and push as hard as you can.

There's a few different techniques we could have used against Ireland but we were not quite clever enough on the day.

I did a visit on the Monday after the game to see a lady - Rachel Trystram - in a nursing home in Skewen near Neath.

She's in her 80s and bed-ridden and I'm her favourite rugby player, and the visit put a different light on the whole rugby thing.

When you go and see a lady who's not in the best of health but screams when you walk through the door because she's so excited to see you, it puts Saturday's game slightly back into perspective.

She said to me: "you tell the boys not to give up". She obviously hasn't.

At the end of the day it's just a game and as much as we hate losing it, there's bigger things sometimes.