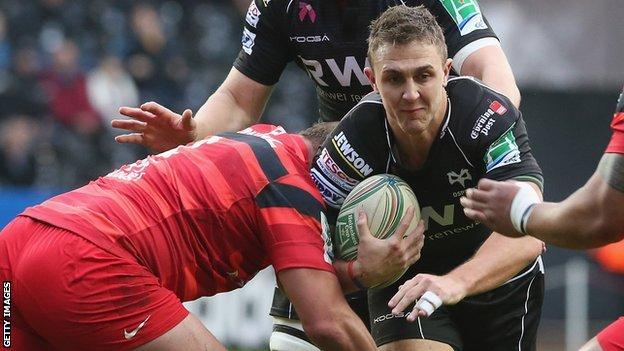 Wales centre Ashley Beck has signed an Ospreys contract extension that will keep him there until the end of the 2015-16 season.

"This is my home region and it's the only place I want to play my rugby," said the seven-cap player.

"As a youngster, playing for the Ospreys was my goal and I've achieved that.

"Now I've established myself here I want to help the region kick on and grow, and I want to play my part in helping the team develop.

"I suppose I've been around long enough to be considered one of the older heads now, despite only being 23.

For a young man he has been around a long time ... which makes people think he is a lot older than he actually is

"We are a young team, especially in the backs, but we've got an exciting mix with a lot of potential and I'm looking forward to being part of this group as it grows over the next two years.

"This is a great place to be and I'm really happy that my future is all sorted, allowing me to concentrate on my rugby."

Beck came through the ranks at Skewen and Tonmawr rugby clubs before making his mark for the Ospreys at regional age-grade level.

His performances at that stage earned Beck international honours at all of Wales' age grade levels.

He also played at a senior level for Aberavon in the Welsh Premiership as his professional career developed.

Ospreys rugby operations manager Andy Lloyd said: "For a young man he has been around a long time, and has a lot of games under his belt, which makes people think he is a lot older than he actually is.

"But we believe that he still has a lot more to offer."

Beck's deal comes in the wake of Wales and British and Irish Lions lock Alun Wyn Jones opting to remain at Liberty Stadium instead of signing a Welsh Rugby Union national contract or moving to France.

Ospreys have also recruited Newport Gwent Dragons hooker Sam Parry and full-back Dan Evans, as well as versatile Fiji back Josh Matavesi from Worcester Warriors ahead of the 2014-14 season.