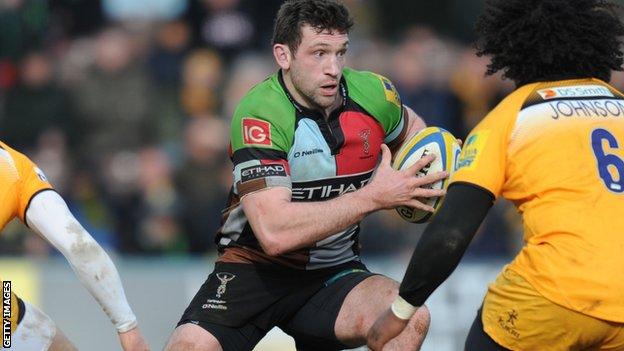 London Irish have agreed a deal to sign Harlequins back row Tom Guest on a two-year contract at the end of the season.

The 29-year-old has made over 200 appearances for Quins and was part of their 2012 Premiership winning squad.

"I have spent over a decade at Harlequins and have enjoyed every minute of it," said Guest.

"Moving to London Irish offers a new challenge and I am relishing being part of the the new exciting vision that my new club expounds."

As well as winning a Premiership title, Guest was also a member of the victorious Amlin Challenge Cup side in 2011.

He has also been involved with England sevens and helped England Saxons win the Churchill Cup in 2008.

London Irish director of rugby Brian Smith added: "Tom is a title winning Premiership player with a wealth of experience.

"He will be a great addition to our club for the next two seasons and is yet another player in London Irish's aspirations to challenge for silverware in the future."

Harlequins director of rugby Conor O'Shea described Guest as a "great servant" of the club.

He added: "We would love to have kept Tom for his entire career but the nature of managing a squad within the imposed salary cap regulations involves both accounting for the players you already have and developing personnel within each position."

Harlequins' back row resources include both the England open-side and England Saxons open-side in Chris Robshaw and Luke Wallace respectively.

They also have Samoa flanker Maurie Fa'asavalu and former England international Nick Easter, plus promising youngsters Jack Clifford, who captained England to victory in the Under-20 World Cup last summer, and Joe Trayfoot.