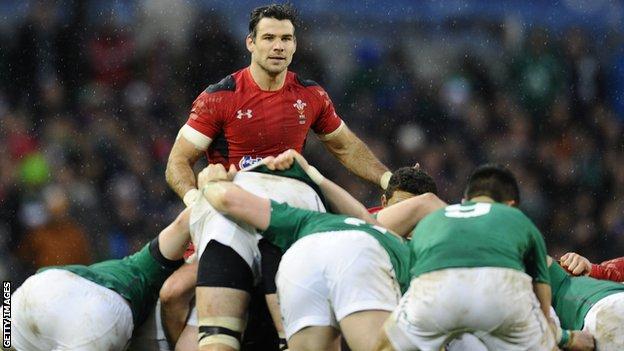 "He must be under pressure," Davies told Radio Wales Sport.

"Mike hasn't played well and the forwards have had a battering in the last couple of games."

Phillips has won 82 Wales caps and played in five British and Irish Lions Tests on two tours - three in South Africa in 2009, when the tourists lost the series 2-1, and twice more as the 2013 Lions beat Australia 2-1.

No matter who you pick at nine and 10 it's going to be very, very difficult when you're on the back foot.

But the 31-year-old Racing Metro player's recent form has been such that another BBC pundit, Jeremy Guscott, has suggested he may be dropped in an attempt to change Wales' tempo.

Wales began their Six Nations campaign with a 23-15 win over Italy, but their bid for a historic third successive title win suffered a blow in the 26-3 defeat by Ireland last weekend.

He added: "No matter who you pick at nine and 10 it's going to be very, very difficult when you're on the back foot.

"I think [Mike] would be picked on the bench if he is dropped because he'd be a great impact player to come on."

Phillips has been recalled by Racing Metro for this weekend's Top 14 match against his former club Bayonne.

But fellow exiles, centre Jamie Roberts and flanker Dan Lydiate, will be rested for Saturday's clash in Paris.

Meanwhile, Phillips' 25-year-old rival Webb, who has made four Test appearances, is set to face Treviso in the Pro12 in Swansea on Sunday.