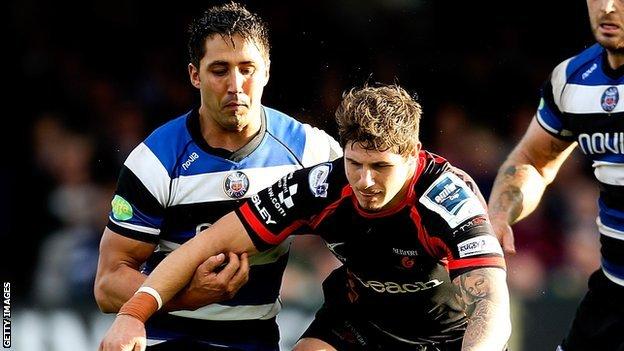 The duo have been linked to the south-east Wales region.

Dragons assistant coach Kingsley Jones also says they would "listen" to overtures from the players' agents.

BBC pundit Davies told Radio Wales Sport: "If it is true, it's a good move for both of them."

Matthew Morgan in particular... he needs regular rugby and if he does [move to Dragons], he can be some player.

In January Bath said they were pondering 32-times capped Henson's future with them.

Wales 10 Dan Biggar and another ex-Wales Under-20 star Sam Davies are competing for the Ospreys' fly-half spot.

Ospreys assistant coach Gruff Rees admits that leaves 5ft 8in, 11st 6lb Morgan, with a decision to make over his future.

"Someone like Matthew has got to look at his options," said Rees.

"Perhaps we feel he's developed to a certain point.

"But that can only go so far without having, perhaps, more of a range of [game-time] minutes through the course of a season.

"We understand that - and that's perhaps the player prerogative."

If he moves to Rodney Parade, Henson would then have played in teams based in Llanelli, Swansea, Cardiff and Newport.

He played for Llanelli as a teenager before joining Swansea and launching a senior career that included an eight-year stint at Ospreys, who were formed by the All Whites and Neath in 2003.

He has also been in the celebrity spotlight as a participant in 71 Degrees North, Strictly Come Dancing and The Bachelor.

But he has also made headlines for off-field issues.

He was coached by Dragons boss Lyn Jones at Ospreys and London Welsh.

Kingsley Jones said: "Gavin Henson? Well he's a favourite of Lyn's so there's always a connection between Lyn and Gavin.

"He's in contract at Bath until the end of this season and who knows for next season?"

Kingsley Jones says the Dragons "think highly" of regular stand-off Jason Tovey adding: "We need depth and we need strong players of that quality and experience.

"But truthfully, you know, agents are pushing these players out and we're interested to listen because you have to.

"But I don't think it's any more than that at the moment."