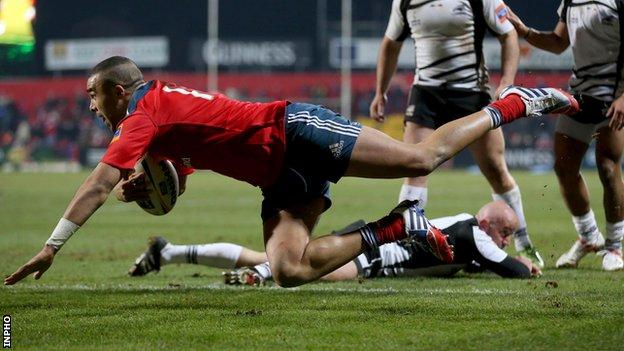 Tommaso D'Apice scored an early try for Zebre after 11 minutes, Munster dominated after that.

Lock Donncha O'Callaghan came on as a replacement make a record 241st appearance in a Munster shirt.

It was Munster's final game at Musgrave Park this season as the Cork venue is to be redeveloped for next season.

Irishman Zebo will hope his first-half brace convinces Joe Schmidt to give him a Six Nations call-up.

Munster took a while to get going and the Italians stunned the Musgrave Park crowd with a high-quality opening try.

Giovanbattista Venditti, a late inclusion on the left wing, slipped past two tacklers and handed off CJ Stander before passing for hooker D'Apice to dive over.

Munster closed the gap to 5-3 on the quarter hour when JJ Hanrahan punished Zebre lock George Biagi for a side-entry call.

O'Callaghan had an earlier-than-expected introduction on a night when he overtook Ronan O'Gara's appearance record for the club. The lock's 241st appearance arrived in the 18th minute when he came on for the injured David O'Callaghan.

The hosts began to click into gear in the second quarter and following an Ian Keatley-inspired break in the middle, there were numbers wide on the left where Zebo spun away from Brendon Leonard to score in the corner.

Hanrahan converted and the second try came when Zebo evaded Kameli Ratuvou's grasp to glide over in the right corner.

Hanrahan missed the difficult conversion, ending his run of 19 successful place-kicks in a row, but Munster were beginning to find some rhythm at 15-5 up.

Former All Black Leonard raced into Munster territory to set up an early Palazzani penalty which closed the gap back to seven points.

There were few incidents of note during a substitution-filled third quarter, and it was only after Van Schalkwyk saw yellow for infringing close to the Zebre line that Munster zoned in on the bonus point.

A powerful line-out maul did the trick as Slattery was driven over in the 62nd minute and Keatley converted for a 22-8 scoreline.

South African Stander, the man of the match, then took a quick tap in the 70th minute and a swift recycle from the ruck saw his back-row colleague O'Donnell squeeze in for the bonus-point try.

Keatley again added the extras and his final and most difficult kick of the night was also on target, as he converted after Duncan Williams put fellow replacement Slattery over by the corner flag.